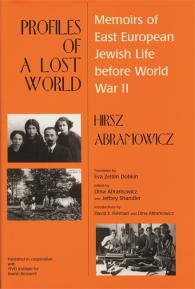 Profiles of a Lost World

First published in a Yiddish edition in 1958, Profiles of a Lost World is a source of information about Eastern Europe before World War II as well as an touchstone for understanding a rich and complex cultural environment. Hirsz Abramowicz (1881-1960), a prominent Jewish educator, writer and cultural activist, knew that world and wrote about it, and his writings provide an eyewitness account of Jewish life during the first half of the twentieth century.

Abramowicz was a witness to war, revolution and major cultural transformations in the Jewish world. His essays, written and originally published in Yiddish between 1920 and 1955, document the local history of Lithuanian Jewry in rural and small-town settings, and in the city of Vilna—the "Jerusalem of Lithuania"—which was a major center of East European Jewish intellectual and cultural life. They shed light on the daily life of Jews and the flourishing of modern Yiddish culture in Eastern Europe during the early 20th century and offer a personal perspective on the rise of Jewish radical politics.

The collection incorporates local history of Lithuanian Jewry, shtetl folklore, observations on rural occupations, Jewish education, and life under German occupation during World War I. It also includes a series of profiles of leading social and intellectual Jewish personalities of the author's day, from traditional scholars to revolutionaries. Together the selections provide a blend of social and personal history and a window on a lost world.

Hirsz Abramowicz was a teacher and school administrator in Tsarist Russia and in interwar Vilna and later a journalist for American and foreign Jewish newspapers.

Dina Abramowicz, the author’s daughter, is a reference librarian at the YIVO Institute for Jewish Research.

Jeffrey Shandler is a Dorot Teaching Fellow in the Skirball Department of Hebrew and Judaic Studies at New York University.

David E. Fishman is the chair of the Department of Jewish History at the Jewish Theological Seminary of America and a senior research associate at the YIVO Institute for Jewish Research.

[YIVO Institute for Jewish Research librarian, Dina Abramowicz] devoted considerable effort to ensuring that a book by her father, Hirsz Abramowicz . . . would appear in English translation. In 1999, just a year before Dina died at the age of 90, [PROFILES OF A LOST WORLD] — first published in Buenos Aires in 1958 as part of the famous series "Dos poylishe yidntum" — was published in English by Wayne State University Press.

3 hours 20 min ago
Happy Pub Date to THE SPOOK WHO SAT BY THE DOOR, SECOND EDITION! This new edition of a literary classic now includ… https://t.co/XrCsLZvf4D
3 hours 24 min ago
RT @DarkProjections: Returned from a great two weeks in Europe to find copies of my new book! Kolchak:The Night Stalker, one of the Pion… https://t.co/kPJ5kKLRyr
1 day 20 min ago
RT @oneitadetroit: Thrilled that @WSUPress is releasing the 2E of Sam Greenlee's "The Spook Who Sat by the Door" tomorrow. Introductio… https://t.co/hZpAjxluIl