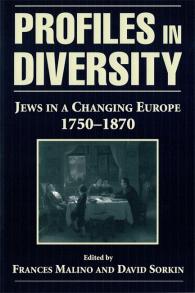 First published in 1990, as From East and West, Profiles in Diversity explores the momentous transformation in Europe from 1750-1870 by looking at the lives of European Jews who experienced the shift from segregation on the margins of early modern society to integration in the modern nation state. The contributors present the lives of men, women, and children, Sephardim and Ashkenazim, rich and poor, urban and rural, educated and unschooled, and examine a broad spectrum of social experience and attitudes, including cultural outlook and ambition, marriage and family life, occupations and residence. Ranging from the East European Pale of settlement and the Ottoman Empire to Western Europe, this volume conveys the fascinating diversity of Jewish life in transition. The essays consider merchants and bankers in Bordeaux, Istanbul, and Alsace; intellectuals and teachers in Paris, Dessau and Lithuania; parvenus in London, Koenigsberg, and Berlin; and Orthodox rabbis in Moravia, Posen, and London.

Frances Malino is Sophia Moses Robinson Professor of Jewish studies and history at Wellesley College. She is the author of A Jew in the French Revolution (Blackwell, 1996) and The Sephardic Jews of Bordeaux (University of Alabama Press, 1978).

David Sorkin is Frances and Laurence Weinstein Professor of Jewish studies at the University of Wisconsin-Madison. He is the author of Moses Mendelssohn and the Religious Enlightenment (University of California Press, 19960 and The Transformation of German Jewry (Oxford University Press, 1987).