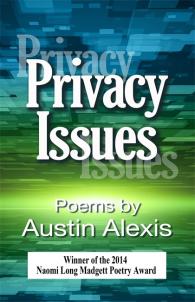 In Privacy Issues, Austin Alexis deals with a multitude of subjects. Seldom a participant, he is rather an empathetic observer of life. Even when the speaker seems to be himself, we are not sure whether he is using this technique to make the poem seem more personal or employing his imagination to get inside his character’s mind.
This book is divided into three numbered sections. In the first and longest, his subjects do not originate in an ivory tower but are as contemporary and relevant as today’s news reports. They include guns, prisoners, increasing dependence on technological gadgets, and the use of animals in scientific experiments. They also deal with biological weapons, the tragic destruction of the Twin Towers, the effect of the Gulf oil spill on a duck, and the routine lives of ordinary workers. His title poem questions a corporation’s demand for excessive and unnecessary personal information.

The second section includes poems about Emily Dickinson, Bette Davis, and the Beatles. Several selections are about dancers and dancing; others are about H.I.V. and AIDS, transsexuals and "drag queens," adversaries of Hitler, the relationship of roommates, and a character’s irrational fear of public or open spaces.

In the final section, several poems deal with cancer, surgery, and recuperation. While there is also a father’s death, the predominant tone of section 3 is one of hope that defies negative conditions. A baby falls from a high window but is caught and saved by a bystander. Sylvia Plath commits suicide but continues to live through the power of her poetry. A subway rider falls to the tracks but is rescued by a stranger. A rosebush representing death still exudes sweetness.

Privacy Issues is an emotionally and intellectually stimulating first book by the winner of the 2014 Naomi Long Madgett Poetry Award.

Austin Alexis is the winner of the 2014 Naomi Long Madgett Poetry Award. He has written two chapbooks—Lovers and Drag Queens and Lincoln & Other Poems. A resident of New York City, Alexis received his education at Adelphi University, Queens College, and New York University. He has taught literature and creative writing at a number of colleges, including Long Island University, John Jay College, and Hunter College, and currently teaches at New York City College of Technology.

Austin Alexis creates legend out of the ordinary and domesticates the fiercely strange in this long-awaited first [full-length] collection...