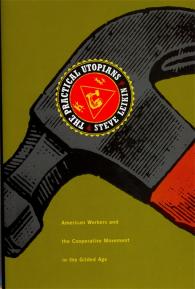 American Workers and the Cooperative Movement in the Gilded Age

...a thought-provoking book that will likely become a major touchstone for understanding the subject.

Between 1865 and 1890, in the aftermath of the Civil War, virtually every important American labor reform organization advocated "cooperation" over "competitive" capitalism and several thousand cooperatives opened for business during this era. The men and women who built cooperatives were practical reformers and they established businesses to stabilize their work lives, families, and communities. Yet they were also utopians—envisioning a world free from conflict where workers would receive the full value of their labor and freely exercise democratic citizenship in the political and economic realms. Their visions of cooperation, though, were riddled with hierarchical notions of race, gender, and skill that gave little specific guidance for running a cooperative.

The Practical Utopians closely examines the experiences of working men and women as they built their cooperatives, contested the meanings of cooperation, and reconciled the realities of the marketplace with their various and often conflicting conceptions of democratic participation. Steve Leikin provides new theories and examples of the failure and successes of the cooperative movement, including how the Gilded Age’s most powerful labor organization, the Knights of Labor, collapsed in the face of the expanding industrial economy. Dealing with a critically important yet largely ignored aspect of working-class life during the late nineteenth century, The Practical Utopians brings crucial aspects of the cooperative movement to light and is a necessary study for all scholars of history, labor history, and political science.

Steve Leikin is lecturer for the Department of History at San Francisco State University.

Producers' cooperation was one of the major strains within the labor movement of the nineteenth century, yet it has received little attention from labor historians. Not only does The Practical Utopians offer us access to this rich history, but it also provides a lens through which we can examine the deep value conflict between individualism and competition, on the one hand, and mutuality and cooperation, on the other.

Steve Leikin summarizes past work and adds much new research...a thought-provoking book that will likely become a major touchstone for understanding the subject.

The Practical Utopians is an important contribution and deserves a wide audience."