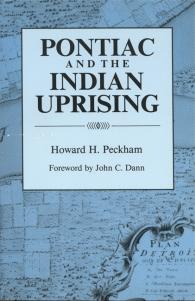 Pontiac and the Indian Uprising

A fascinating history about the man who initiated an inspiring episode in Michigan's past.

First published in 1947, Pontiac and the Indian Uprising is a product of his time; it is both informative and reflective of the attitudes that existed fifty years ago about Native Americans. Howard Peckham examines how Pontiac was able to lead four tribes to war and inspire the revolt of many more. He looks at the circumstances that motivated and encouraged him, and finally, at Pontiac's eventual failure.
This comprehensive investigation of Pontiac's life was difficult because, unable to write, he left no collection of papers. All of his contemporaries who wrote about him were also his enemies, so obtaining an objective picture from them was nearly impossible. Peckham used important source material that enabled him to understand the Ottawa chief and to trace his movements with some continuity. The book includes, in full, the few letters that Pontiac dictated and his speeches.

Howard H. Peckham is the former diector of the William L. Clements Library at the University of Michigan.

A fascinating history about the man who initiated an inspiring episode in Michigan's past.