Home » Books » The Politics of Magic 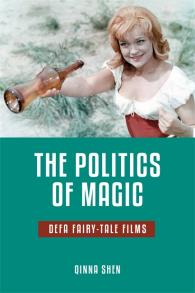 The Politics of Magic

From Paul Verhoeven’s The Cold Heart in 1950 to Konrad Petzold’s The Story of the Goose Princess and Her Loyal Horse Falada in 1989, East Germany’s state-sponsored film company, DEFA (Deutsche Film-Aktiengesellschaft), produced over forty feature-length, live-action fairy-tale films based on nineteenth-century folk and literary tales. While many of these films were popular successes and paved the way for the studio’s other films to enter the global market, DEFA’s fairy-tale corpus has not been studied in its entirety. In The Politics of Magic: DEFA Fairy-Tale Films, Qinna Shen fills this gap by analyzing the films on thematic and formal levels and examining their embedded agendas in relation to the cultural politics of the German Democratic Republic.

In five chapters, Shen compares the films with earlier print versions of the same stories and analyzes revisions made in DEFA’s film adaptations. She also distinguishes the DEFA fairy-tale films from National Socialist, West German, and Disney adaptations of the same tales. Her archival work reconstitutes the cultural-historical context in which films were produced and received, and incorporates the films into the larger narrative of DEFA. For the first time, the banned DEFA fairy-tale comedy, The Robe (1961/1991), is discussed in depth. The book’s title The Politics of Magic is not intended to suggest that DEFA fairy-tale films were merely mouthpieces of official ideology and propaganda. On the contrary, Shen shows that the films run the gamut from politically dogmatic to implicitly subversive, from kitschy to experimental. She argues that the fairy-tale cloak permitted them to convey ideology in a subtle, indirect manner that allowed viewers to forget Cold War politics for a while and to delve into a world of magic where politics took on an allegorical form.

The fact that some DEFA fairy-tale films developed an international audience (particularly The Story of Little Mook and Three Hazelnuts for Cinderella) not only attests to these films’ universal appeal but also to the surprising marketability of this branch of GDR cinema and its impact beyond the GDR’s own narrow temporal and geographic boundaries. Shen’s study will be significant reading for teachers and students of folklore studies and for scholars of German, Eastern European, cultural, film, media, and gender studies.

Qinna Shen is Assistant Professor of German at Bryn Mawr College in the suburb of Philadelphia. Her research interests concentrate on the areas of German Studies (20th century), Film Studies, and Transnational Studies with a focus on German-Asian cultural relations. She has co-edited Beyond Alterity: German Encounters with Modern East Asia (Berghahn, 2014). Her monograph entitled The Politics of Magic: DEFA Fairy-Tale Films (Wayne State UP, 2015) is the first comprehensive, critical, book-length treatment of the live-action fairy-tale films from former East Germany. Her next book project is tentatively titled "Raising the ‘Bamboo Curtain’: Film Exchange between China and Divided Germany." It will focus primarily on international film trade, genres, cultural politics, censorship, reception, as well as on German-Chinese co-productions.

Shen's clear, accessible language and her informative and formal -- but not stilted--writing style make this study a wonderful resource for a wider audience of readers.

One of the best-kept secrets of the Cold War was the magical production of remarkable political fairy-tale films in East Germany. Now, however, the secret is out with the publication of Qinna Shen’s excellent book, The Politics of Magic: DEFA Fairy-Tale Films. Shen studies the complex development of more than forty films from the 1950s to the fall of the Berlin Wall, and she also provides insightful social and political analyses. Indeed, one of the most interesting ways to understand the cultural history of the German Democratic Republic is through the DEFA fairy tales, and Shen’s study is the first comprehensive work to accomplish this.

Qinna Shen’s monograph is a major contribution to the study of this important but all-too-often neglected genre of East German film production. Clearly written and with numerous illustrations, The Politics of Magic offers the reader a fascinating insight into the cultural history of these important films. By integrating individual case studies (many of which draw on detailed archival research) into an overarching history of the genre, Shen has produced a study that will be essential reading for film scholars and cultural historians alike.

Shen’s interpretive analyses and rigorous enquiry into so many of these fairy-tale films reveals a cumulative insight of
immense value.

The Politics of Magic is a highly readable and intelligently constructed study of a cherished tradition. As a nuanced critique of the ‘red’ fairy-tale film, the book brings to light the complexities of a genre that for too long has been dismissed as ‘mere propaganda.’

What Shen provides [. . .] is the indispensable background, the larger context, against which scholars might want to analyze individual films more closely. For scholars of fairy tales and folklore more broadly, Shen's book provides a compelling history of the way in which the GDR drew on the fairy-tale tradition in order to further its own ideology, suggesting once again the malleability of these texts.

The author has a clear, yet effective and sophisticated writing style. The book is appropriate for the general public and undergraduates through academics. It is of interest to those engaged in film history, to German Studies and Slavic Studies scholars, and also anyone interested in children’s literature and genre studies.

Firmly grounded in a contextual, diachronic, and transnational approach, Shen’s analysis of numerous fairy tale adaptations alongside their original sources makes it a valuable resource that will have many wondering why they had not paid more attention to more of these films sooner.