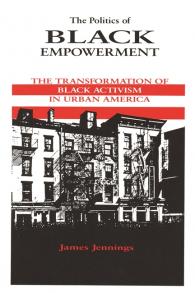 The Politics of Black Empowerment

The Transformation of Black Activism in Urban America

James Jennings has produced a first-class study of the metamorphosis of the activistic axis in Black urban politics, shrewdly structuring the study in terms of transformation from activism for mobilization-politics to activism for governance-politics.

In analyzing Black politics since the late 1960s, James Jennings focuses on both the behavioral aspects, such as individual and group characteristics of voting and nonvoting and elections, as well a more fundamental philosophical and cultural questions regarding Black politics.

This study examines how the "traditional" face of Black politics and electoral activism interacts with a growing "progressive" face of Black politics. While traditional Black political activists seek access or political incorporation, another group aims for power sharing. The traditional approach is sometimes satisfied with merely replacing white politicians with Blacks, but the progressive constituency focuses on fundamentally changing the whole economic and political pie. Activist desirous of Black empowerment are pursuing a political and economic orientation that goes beyond programs based on access to American institutional arrangements and attempting to change or alter given political arrangements and social relations between Blacks and whites on the basis of changing the social structure and the distribution of wealth and power.

Based on interviews with Black and Latino activist in several big cities as well as review of the literature and the Black newspapers around the country, The Politics of Black Empowerment describes the characteristics of Black empowerment activism in America.

James Jennings is a professor of political science and senior fellow at the Trotter Institute, University of Massachusetts at Boston. He has published a lectured widely on Black and Latino politics and is involved with numerous grassroots efforts aimed at neighborhood empowerment.

James Jennings has produced a first-class study of the metamorphosis of the activistic axis in Black urban politics, shrewdly structuring the study in terms of transformation from activism for mobilization-politics to activism for governance-politics.