Home » Books » The Plum Tree Blossoms Even in Winter 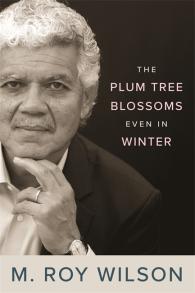 The Plum Tree Blossoms Even in Winter

From a childhood marked by loneliness and want, M. Roy Wilson forged an extraordinary life of accomplishment and acclaim. His accomplishments include the presidencies of four universities, dean of two medical schools, and deputy director of one of the National Institutes of Health’s twenty-seven Centers and Institutes. Through this inspiring and deeply personal story of struggle and success, Wilson shares insights gleaned through his life experiences, many of which helped others reach their highest potential as students, faculty, physicians and people.

Born to a Japanese mother and Black father, much of M. Roy Wilson’s childhood in Japan was marked by parental absence, sexual abuse, extended periods as a runaway, physical confrontations and frequent moves. He was often forced to play the role of caregiver to his younger sister, and together they grew to depend on each other for support until their teenage years.

Under the guidance of his high school English teacher, Wilson turned his life around and obtained an MD from Harvard Medical School. His adult life as a physician was ironically beset with significant health challenges, including diagnoses of cardiomyopathy that rendered him uninsurable, a potentially blinding eye disease, and cancer that at first was thought to be terminal. Having developed a veneer of invulnerability as a child, he kept these medical diagnoses a secret until now.

Like the plum tree that blooms even during dark and dreary times, Wilson overcame his childhood challenges and later, his health issues, to achieve distinction in medicine, higher education, and global health research. The journey to this unlikely outcome is an engrossing tale of outside forces that shape racial and cultural identity, the importance of mentorship and friendship, and the lasting impact of an unstable and often heartbreaking family dynamic.

Dr. M. Roy Wilson is chancellor emeritus of the University of Colorado Denver and Health Sciences Center and the twelfth president of Wayne State University. Previously, he was dean of the School of Medicine at Creighton University, where he was the youngest medical dean in the country and the second African American dean of a non-HBCU medical school; president of the four campus Texas Tech University Health Sciences Center; dean of the medical school, president, and chair of the board of directors of Charles Drew University of Medicine and Science; and deputy director of strategic scientific planning and program coordination at the National Institute on Minority Health and Health Disparities at the NIH.

This moving, compelling, fascinating book tells the story of a courageous and extraordinarily accomplished individual whose life journey bears lessons for many of us, including those transitioning between cultures and those aspiring to leadership. It deserves to be widely read.

Roy Wilson’s memoir of overcoming personal, family, and social challenges to become a leader in higher education and in the health professions is truly inspiring. His courage, persistence, and high standards for achievement, integrity, and service show the heights one can reach with determination and focus. Many individuals and institutions are the beneficiaries of his successful journey.

The Plum Tree Blossoms Even in Winter shines brightest when it illuminates Dr. Wilson’s unwavering dedication to caring for marginalized patients, serving underserved populations, giving voice to the voiceless, and creating pathways forward for those who may not have seen that pathway for themselves. The long arc of his career has lifted and empowered the lives of thousands of patients, students, and medical professionals in classrooms and clinics around the world. In the end, one is left with an uplifting story of the joy and privilege of service. This is a wonderful message for all during these trying times.

The Plum Tree Blossoms Even in Winter reminds me that we are all unique, each with our own challengesandopportunities that we must face or seize, depending on our abilities, resolve, and tenacity. Throughout his extraordinary life, M. Roy Wilson contended with hardships and trials that would break the spirit of most people, let alone a young boy on his own and far from home. In each case he persevered, he overcame, he adapted, and he learned. His dogged determination and indefatigable work ethic propelled him from the streets to the highest levels of medicine, research, and higher education. This book is a gripping read and an inspiration for anyone who faces obstacles on the way to achieving their dreams and becoming their best selves.

This riveting and deeply personal biography traces the arc of M. Roy Wilson’s extraordinary life with literary detail. It recounts how the son of a Japanese mother and a Black father overcame childhood trauma and many challenges to graduate from Harvard Medical School and ultimately to serve senior medical roles and as president of several leading universities. His incisive account offers important lessons not just on his life but about life in general, race in America, and leadership.

The Plum Tree Blossoms Even in Winter is a deeply inspiring and personal story of M. Roy Wilson’s struggle and success. Wilson faced numerous barriers throughout his life, from an early childhood marked by difficulties to experiencing racism due to his Black and Japanese heritage to significant health challenges as an adult. Despite these challenges, he persevered, pursuing a medical degree and achieving a highly successful career in ophthalmology, academic medicine, public health, and higher education. His life’s journey, which centers on overcoming adversity, is an inspiration that will serve as motivation to all who read about it—but in particular, it will offer hope to young people who face difficult challenges in life.

An intriguing window into a life well lived! M. Roy Wilson generously shares the wisdom earned through [his] many struggles with a sense of introspection and insight that is inspiring.

‘I resolved to always look to the future and continue to develop and evolve—throughout life.’ We are fortunate to witness M. Roy Wilson’s resolve and forward vision as he makes a difference every day in Detroit and in Michigan. His courage in sharing his story is a small example of his lifelong commitment to ensuring that education and learning are accessible to and valued by all.

President Wilson’s captivating and engaging memoir tells the story of remarkable and unprecedented achievements through overcoming incredible and heartrending adversity. Every page is a life lesson that no matter the odds, with courage, faith, and perseverance one can become a great role model, as M. Roy Wilson has become for me and so many others.

The Plum Tree Blossoms Even in Winter reveals the fascinating life journey of an extraordinary man. Through the prism of this sincerely honest and thoughtfully reflective biography, M. Roy Wilson offers a complex narrative that is nevertheless refreshingly simple in its fidelity to the author’s deeply principled humanity. The lived experience of this biracial, athletically talented physician who was raised in both Japan and the United States paints a compelling portrait of perseverance through a life of challenges that produced one of this nation’s most important academic and physician leaders. The audience for this book is, like its author, diverse, but this memoir will be of special interest to all students who are navigating the contours of their own life journeys.

M. Roy Wilson offers a memoir that is as unexpected as it is powerful, as emotionally moving as it is intellectually provocative. With a cinematic sweep, it depicts the improbable rise of a mixed-race, street-tough, violence-prone young person from the streets of Youngstown to a medical, public, and academic career of transcendent accomplishment. Along the way, Wilson sketches the complexities of family, the timely interventions of friends, the generosity of mentors, and the close connections to colleagues that would ensure that he fulfilled a lifelong dream of service to patients, students, and community. A riveting story that will inspire and humble any reader.

– Francisco Cigarroa, Chair, Board of Trustees, Ford Foundation and former chancellor of the University of Texas System