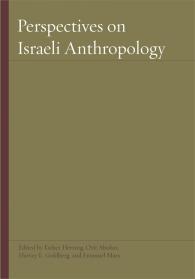 The anthology is comprehensive, the coverage superb, and the total impact of the volume as a whole is impressive...

While Israel is a small country, it has a diverse and continually changing society. As a result, since the 1960s Israeli anthropology has been a fertile ground for researchers. This collection introduces readers to the diverse field of social anthropology in Israel today, pointing to both its rich history and promising future. Drawing upon recent research as well as a few key older articles, editors Esther Hertzog, Orit Abuhav, Harvey E. Goldberg, and Emanuel Marx have selected contributors that highlight different theoretical perspectives and touch on a variety of relevant topics.

Perspectives on Israeli Anthropology begins with an introduction that traces the development of social anthropology in Israel from its beginnings in Palestine prior to Israeli statehood to the present. The essays in this volume are divided into five major thematic sections, including the effects of immigration, the influence of bureaucracies in social life, the negotiation of the social order, tensions between Jewish Israelis and Palestinian Arabs, and notions of "Israeliness" and "Jewishness." Essays offer compelling research and a variety of perspectives on changing senses of identity, ethnicity, religiosity, and gender relations in a society deeply affected by war, violence, and dispossession.

While the contributors in this volume adhere to various theoretical and ethnographic traditions, they all treat Israel as a complex, modern, and open society with much to offer other scholars. Perspectives on Israeli Anthropology will provide an illuminating overview of the discipline for students, teachers, and researchers in the field of social anthropology.

Harvey E. Goldberg is professor emeritus in the Department of Sociology and Anthropology at the Hebrew University of Jerusalem.

Emanuel Marx is professor emeritus in the Department of Sociology and Anthropology at Tel Aviv University.

Its capacious 700-plus pages and 30 chapters not only offer ‘the first comprehensive anthology of social anthropology in Israel’, as Dale Eickelman enthuses on the back cover, but also open up to analysis
a geographical, historical, social, cultural and personal space – ‘Israel’ – that arguably contains the diversity and complexity of anthropology as such.

The anthology is comprehensive, the coverage superb, and the total impact of the volume as a whole is impressive. . . .What is rather special and extremely helpful is that all of these 30 individual chapters are collected in one anthology. The forest is indeed greater than the sum of the trees. As it stands, the blend of the older and the newer (in substance and methods) and the diversity of topics, methodologies, and paradigms all encourage the reader to pursue new areas of interest and new ways that anthropology can shape our understanding of Israeli society.

This collection offers the first comprehensive anthology of social anthropology in Israel. The editors have done an excellent job of assembling a comprehensive and balanced selection of anthopological topics."