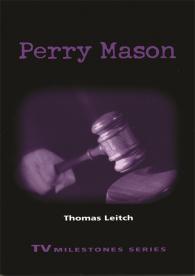 Keep a copy on your nightstand next to a pile of pulp fiction and your lawyer's phone number. It's more engrossing than any dozen episodes of the show itself.

Perry Mason was one of the most successful television programs from the 1950s and remains one of the most influential crime melodramas from any period. The show’s influence goes far beyond its nine-year tenure (1957–66), the millions of dollars it generated for its creators and for CBS, and the definitive identification it provided its star, Raymond Burr. Perry Mason has become a true piece of Americana, evolving through a formulaic approach that law professors continue to use today as a teaching tool.

In his examination of Perry Mason, author Thomas Leitch looks at why this series has appealed to so many for so long and what the continued appeal tells us about Americans’ attitudes toward lawyers and the law, then and now. Beginning with its roots in earlier detective fiction, stories of fictional attorneys, and the work of Erle Stanley Gardner (the show’s creator), Leitch lays out the circumstances under which Perry Mason was conceived and marketed as a distinct franchise. The evolution of Perry Mason is charted here in an inclusive manner, discussing the show’s broadcast history (ending with the series of two-hour telemovies that aired nearly twenty years after the original series ended) alongside its generic nature and place within popular culture, the show’s ideological dynamic, and issues of authorship in the context of television. This concise study is an excellent tool for television and media scholars as well as fans of the Perry Mason series.

Thomas Leitch is professor of English and director of the Film Studies Program at the University of Delaware. He is author of several books, including Crime Films (Cambridge University Press, 2002) and The Alfred Hitchcock Encyclopedia (Facts on File, 2002).

It could be called 'The Case of the Creative Critic' or 'The Case of the Stylish Scholar,' but by any name this book offers illuminating television history at its page-turning best. Thomas Leitch traces the long history of America's most successful mass-media attorney from his beginnings in Erle Stanley Gardner's imagination through his radio, movie, and television incarnations. In arguing his brief, Leitch casts light on everything from popular notions of justice to the hero's distinctive vocal patterns and the amazingly fixed formulas his television series invariably followed. He also unveils Raymond Burr's status as the television program's true auteur, explores the show's relationship to 1950s versions of patriarchy and paternalism, and explains how Mason's professional exploits saddled postwar Americans with a wildly skewed conception of how the legal system really works. Keep a copy on your nightstand next to a pile of pulp fiction and your lawyer's phone number. It's more engrossing than any dozen episodes of the show itself."

5 hours 7 min ago
Happy Pub Date! HOUSE AND HOME is a collection of poems that intensely explore the beauty & wisdom to be found in w… https://t.co/MYnkKJxcrx
2 days 7 hours ago
Join WSU President M. Roy Wilson for a book talk next Wednesday! Copies of his memoir will be available for sale a… https://t.co/6q5w5dtFtu
4 days 7 hours ago
TONIGHT! Join @stephanie_heit at @ShopBooksweet for local author's night! https://t.co/pTny5OErDe