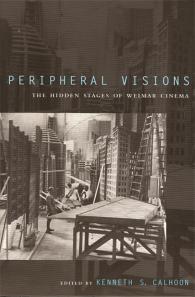 The Hidden Stages of Weimar Cinema

Peripheral Visions is an enormously Impressive and engaging collection of essays on Weimar cinema in the context of contemporary theory, cultural criticism from the Weimar Republic, and German literary and cultural history.

The title of this collection echoes Siegfried Kracauer’s statement that the lavish movie palaces of 1920s Germany served to stimulate peripheral vision and thus prevent the audience from being absorbed by the spectacle itself. In consideration of questions concerning spatial transformations in and around Weimar cinema, the eight essays in this volume, though some more explicitly than others, have Kracauer as their interlocutor. The first major critic of classic German cinema, Kracauer is patron of the optics that seeks insight on the periphery, inviting the analysis of those other spaces that are implicated, if not present, in the films themselves.

The films treated in this volume include such Expressionist mainstays as Lang’s Metropolis and Murnau’s Nosferatu as well as generally less familiar works, e.g., Ruttman’s Berlin, Symphony of a City, Jessner’s Backstairs, Berger’s Day and Night, and the mountain films of Fanck and Riefenstahl. Among the "hidden stages" analyzed are amusement parks, carnivals, department stores, train compartments, city streets, the womb, the theater, the chamber, basement apartments—and ultimately Neubabelsberg, the gargantuan studio-complex near Berlin where so many of these peripheral spaces came to be simulated.

With references that range from set architecture to Christmas celebrations, from the poetry of Rilke to chamber music, from the introduction of sound to Macy’s parades, and from an "urban unconscious" to a "cinematic sublime," Peripheral Visions is a richly nuanced collection that will be of lasting interest to students and scholars of film and German cultural studies.

Kenneth S. Calhoon is a professor of German and Comparative Literature at the University of Oregon and author of Fatherland: Novalis, Freud, and the Discipline of Romance (Wayne State University Press, 1992).

The first anthology on Weimar cinema in this country, Peripheral Visions presents original and creative approaches to German cinema's most fascinating period. Probing, sensitive, and demanding, the essays in this volume provide dynamic readings of genres such as the mountain film and the Kammerspiel, the mega-production Metropolis, the transition from silent to sound film, as well as new approaches to Siegfried Kracauer, the period's most influential film critic. An excellent source for scholars and students of German cinema and cultural history.