Home » Books » "Peering Through the Lattices" 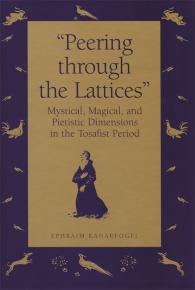 "Peering Through the Lattices"

Mystical, Magical, and Pietistic Dimensions in the Tosafist Period

During the high Middle Ages, the tosafists flourished in northern Europe and revolutionized the study of the Talmud. These Jewish scholars did not participate in the philosophical and religious thought that concerned Christendom, and today they are seen as having played a limited role in mystical or esoteric studies.

Ephraim Kanarfogel now challenges this conventional view of the tosafists, showing that many individuals were influenced by ascetic and pietistic practices and were involved with mystical and magical doctrines. He traces the
presence of these disciplines in the pre-Crusade period, shows how they are intertwined, and suggests that the widely available Hekhalot literature was an important conduit for this material. He also demonstrates that the asceticism and esotericism of the German Pietists were an integral part of Ashkenazic rabbinic culture after the failure of Rashbam and other early tosafists to suppress these aspects of pre-Crusade thinking.

The identification of these various forms of spirituality places the tosafists among those medieval rabbinic thinkers who sought to supplement their Talmudism with other areas of knowledge such as philosophy and kabbalah, demonstrating the compatibility of
rabbinic culture and mysticism. These interests, argues Kanarfogel, explain both references to medieval Ashkenazic rabbinic figures in kabbalistic literature and the acceptance of certain ascetic and mystical practices by later Ashkenazic scholars.

Drawing on original manuscript research, Kanarfogel makes available for the first time many passages produced by lesser known tosafists and rabbinic figures and integrates the findings of earlier and contemporary scholarship, much of it published only in Hebrew. "Peering through the Lattices" provides a greater appreciation for these texts and opens up new opportunities for scholarhship in Jewish history and thought.

Ephraim Kanarfogel is E. Billi Ivry Professor of Jewish History and chair of the Rebecca Ivry Department of Jewish Studies at Stern College for Women, Yeshiva University. He is the author of Jewish Education and Society in the High Middle Ages (Wayne State University Press, 1991), which won a National Jewish Book Award.

1 day 4 hours ago
Happy Pub Date to THE SPOOK WHO SAT BY THE DOOR, SECOND EDITION! This new edition of a literary classic now includ… https://t.co/XrCsLZvf4D
1 day 5 hours ago
RT @DarkProjections: Returned from a great two weeks in Europe to find copies of my new book! Kolchak:The Night Stalker, one of the Pion… https://t.co/kPJ5kKLRyr
2 days 1 hour ago
RT @oneitadetroit: Thrilled that @WSUPress is releasing the 2E of Sam Greenlee's "The Spook Who Sat by the Door" tomorrow. Introductio… https://t.co/hZpAjxluIl