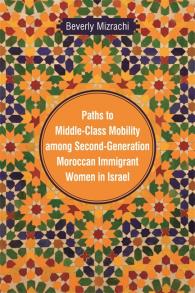 Well anchored in research literature where gender, immigration, and mobility intersect, Beverly Mizrachi provides us with an insightful grasp of second-generation Moroccan Jewish women in Israel

While first-generation immigrant women often begin their lives at the bottom of their new societies, the fates of their adult daughters can be very different. Still, little research has been done to examine the opportunities or constraints that second-generation women face and the class achievements they make. In this volume, author Beverly Mizrachi presents an in-depth study of 40­-50-year-old Moroccan women whose parents made up part of the largest ethnic group to enter Israel after its establishment in 1948 and whose mothers began their new lives at the bottom of the economic and social ladder. Through her analysis of the life history narratives of these women, Mizrachi reveals that they used a range and number of sites to achieve an impressive mobility into the low, middle, and high segments of the middle class. Mizrachi's findings have implications for studying the middle-class mobility of second-generation immigrant women from subordinate groups in other Western societies.

Paths to Middle-Class Mobility among Second-Generation Moroccan Immigrant Women in Israel begins by examining the historical background and culture of Jewish communities in Morocco that affected the mobility resources of the first, immigrant generation of Moroccan women in Israel and those accrued by the second generation. Mizrachi goes on to analyze the life history narratives of a group of six second-generation Moroccan women to show how they used their education, employment, gendered spousal relationships, motherhood, residential mobility, and the body to achieve their middle-class mobility. Ultimately, she finds that these women used their human agency and social structures over these multiple social sites to reach their class goals for themselves and their children while simultaneously constructing new classed and ethnicized feminine identities.

Mizrachi's findings integrate issues of gender, ethnicity, immigration, and class mobility in a single intriguing study. Her volume will appeal to students and teachers of sociology, anthropology, ethnography, and Middle East studies as well as readers interested in immigration and women's studies.

Beverly Mizrachi is a senior lecturer in sociology at Ashkelon Academic College in Ashkelon, Israel. She is a co-author of the book Immigrants in Israel and has published research on gender, immigration and absorption, stratification and class mobility, and the family in professional journals and anthologies.

Beverly Mizrachi's beautifully written, theoretically rich study of second-generation Moroccan immigrant women in Israel who strove to enter the middle class is a pioneering piece of research. The technique of in-depth interviewing brings the women into sharp focus while also illuminating a story we never knew. In this world where female immigrants far outnumber males, we can use the experience of these daughters of immigrants as a guide to producing positive outcomes for them and for the society they entered.

Well anchored in research literature where gender, immigration, and mobility intersect, Beverly Mizrachi provides us with an insightful grasp of second-generation Moroccan Jewish women in Israel, and significantly expands our perspective on middle-class Israelis whose provenance is from Middle Eastern countries.

Mizrachi has absorbed and integrated much of the insight and theoretical developments of the recent decades in the field of gender studies. Thus her discussion of mobility into the middle class includes, in addition to education and employment, gendered issues of marriage and family, motherhood, and body. This leads to a far more complex and multilayered discussion than is common in more conventional (quantitative) studies of mobility. The multiple levels enable Mizrachi to deal with identity and, more specifically, to come to conclusions concerning the different ways the interviewees construct an ethnically feminine, class-oriented identity.

– Deborah Bernstein, associate professor of sociology at the University of Haifa

A pioneering piece of research. The technique of in-depth interviewing brings the women into sharp focus while also illuminating a story we never knew.