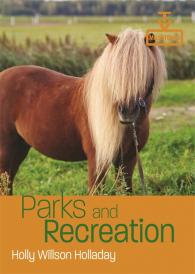 An homage to Parks and Recreation (2009–15) and an exploration of how the show evolved as a traditional network sitcom in a post-network era. This deep dive into the series highlights the new norm of digital fandom, where social media has become a means for fans to engage with the series beyond its runtime. While the media landscape evolved, so did American sociopolitical discourse; Holladay examines the series contained entirely within Barack Obama’s presidency as it reflects the role of politics in American life on a micro scale.

The series follows the career and personal life of Leslie Knope (Amy Poehler), a self-possessed, midlevel bureaucrat whose initial ideology reflects the optimistic tone of politics ushered in with Obama’s campaign and early presidency. Throughout its run, Parks and Recreation engaged with political debates simmering in American culture, offering a humorous ripped-from-the-headlines take on issues such as same-sex marriage, distrust of politicians, government shutdowns, and corporate bailouts Through compelling analysis, Holladay untangles representations of women and BIPOC in the series as they engage with contemporary discourse surrounding media and identity politics.

Holly Willson Holladay is associate professor of media theory and criticism at Missouri State University. She received her doctorate in media and cultural studies from the University of Missouri. Her research about identity, popular media, and media audiences has been published in journals such as Journal of Fandom Studies, Feminist Media Studies, the Journal of Popular Culture, and in various edited collections.

Placing Parks and Recreation in social and political context, as well as within the history of American television and the sitcom genre, Holladay brings sharp analysis to this beloved series. Relive the world of Pawnee in a new light!

– Elana Levine, author of Her Stories: Daytime Soap Opera and US Television History

Holladay makes an authoritative case for Parks and Recreation’s status as phenomenal television in the post-network era. Addressing the aesthetic, political, and cultural significance of the sitcom, this book provides a comprehensive and accessible illustration of the myriad approaches to television criticism in rhetoric and media studies.

22 hours 20 min ago
Today is #smallbusinesssaturday! Make a stop into your favorite local business or #indiebookstore, and get started… https://t.co/yddIwk9cIF
1 day 22 hours ago
Our holiday sale is officially here! Starting TODAY, take 30% off ALL BOOKS with code HOL2 at… https://t.co/s5Dp8iGvDg
3 days 15 hours ago
@upfromsumdirt We are very excited to work with you on this collection!