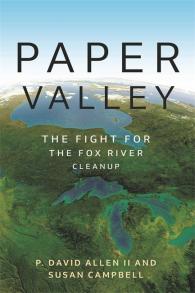 The Fight for the Fox River Cleanup

When government scientist David Allen arrived at his new jobsite in the 1990s, the Fox River near Wisconsin's Green Bay was dominated by hulking paper mills, noxious industrial odors, and widespread ecological damage. Confronted by his lack of resources to force the politically powerful "Paper Valley" polluters to fix their mess, Allen proceeds against all bureaucratic odds in building a $1 billion case against the paper company bosses. Two small but vital players, Allen along with journalist Susan Campbell were relentless in bringing the case to the public at the time. They do so again in this book: an act of radical transparency to uncover the intrigue that nearly blocked the cleanup behind the scenes at US Fish and Wildlife, Wisconsin’s Department of Natural Resources, and the US Environmental Protection Agency. In a rare and major environmental win, the Fox River became the site of the largest polychlorinated biphenyls cleanup in history, paid for by the paper companies rather than taxpayers, to the tune of $1.3 billion, and completed in 2020.

This true story of struggle, perseverance, and success inspires hope for environmentalists who strive to restore natural landscapes. The detailed account given in this book is meant to inspire and offer practical knowledge and solutions for those fighting similar opponents of environmental cleanup and restoration. Allen and Campbell eloquently outline the problematic bureaucracy involved in environmental cleanup efforts and reveal tactics to compel corporate entities who would dodge accountability for decades worth of contamination.

P. David Allen II is a retired wildlife biologist and environmental consultant, who has worked for federal, state, tribal, and local governments in twenty-five states.

Susan Campbell is a former environmental reporter for the Green Bay Press-Gazette and the coauthor of Beyond Earth Day: Fulfilling the Promise, with the late Earth Day founder, Sen. Gaylord Nelson.

In a classic tale of the collision between environmental science and environmental politics, this account shows the good guys can win—and so can our environment. Much-needed hope for clean water and air abounds in this book.

Paper Valley provides a first-person account of a significant environmental win, not just for the people and wildlife of northeastern Wisconsin but for everyone and everything who loves or lives around our Great Lakes. Susan Campbell and David Allen II provide a compelling account of events, laying out their efforts to stop paper companies from dumping cancer-causing PCBs into a Lake Michigan tributary. This book is a road map for those who are seeking environmental justice, yet it reads like a whodunit as Allen and Campbell describe how they faced physical threats and put their careers in jeopardy to do the right thing. I am in awe of their courage and tenacity.

– William Rapai, author of Lake Invaders: Invasive Species and the Battle for the Future of the Great Lakes (Wayne State University Press, 2016)