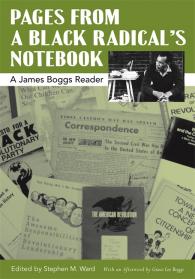 Pages from a Black Radical's Notebook

Edited by Stephen M. Ward
With an Afterword by Grace Lee Boggs

When I first came upon James Boggs's writings three decades ago, it changed my life. Poring over each of the essays collected here by the indefatigable Stephen Ward, I know why he had such an impact. His work was always incisive, clear, dialectical, and genuinely revolutionary.

Born in the rural American south, James Boggs lived nearly his entire adult life in Detroit and worked as a factory worker for twenty-eight years while immersing himself in the political struggles of the industrial urban north. During and after the years he spent in the auto industry, Boggs wrote two books, co-authored two others, and penned dozens of essays, pamphlets, reviews, manifestos, and newspaper columns to become known as a pioneering revolutionary theorist and community organizer. In Pages from a Black Radical’s Notebook: A James Boggs Reader, editor Stephen M. Ward collects a diverse sampling of pieces by Boggs, spanning the entire length of his career from the 1950s to the early 1990s.

Pages from a Black Radical’s Notebook is arranged in four chronological parts that document Boggs’s activism and writing. Part 1 presents columns from Correspondence a newspaper written during the 1950s and early 1960s. Part 2 presents the complete text of Boggs’s first book, The American Revolution: Pages from a Negro Worker’s Notebook, his most widely known work. In Part 3, "Black Power—Promise, Pitfalls, and Legacies," Ward collects essays, pamphlets, and speeches that reflect Boggs’s participation in and analysis of the origins, growth, and demise of the Black Power movement. Part 4 comprises pieces written in the last decade of Boggs’s life, during the 1980s through the early 1990s. An introduction by Ward provides a detailed overview of Boggs’s life and career, and an afterword by Grace Lee Boggs, James Boggs’s wife and political partner, concludes this volume.

Pages from a Black Radical’s Notebook documents Boggs’s personal trajectory of political engagement and offers a unique perspective on radical social movements and the African American struggle for civil rights in the post–World War II years. Readers interested in political and ideological struggles of the twentieth century will find Pages from a Black Radical’s Notebook to be fascinating reading.

Stephen M. Ward is assistant professor at the University of Michigan in the Center for Afroamerican and African Studies (CAAS) and the Residential College.

This volume should be required reading for anyone who wants to understand urban social transformation in the second part of the twentieth century. It fills many gaps in our current understanding of urban, civil rights, black power, labor, and revolutionary history."

When I first came upon James Boggs's writings three decades ago, it changed my life. Poring over each of the essays collected here by the indefatigable Stephen Ward, I know why he had such an impact. His work was always incisive, clear, dialectical, and genuinely revolutionary. A visionary thinker, Boggs is as relevant now as he ever was."