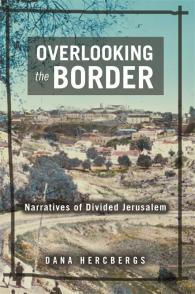 Overlooking the Border: Narratives of Divided Jerusalem by Dana Hercbergs continues the dialogue surrounding the social history of Jerusalem. The book’s starting point is the border that separated the city between Jordan and Israel in 1948–1967, a lesser-known but significant period for cultural representations of Jerusalem. Based on ethnographic fieldwork, the book juxtaposes Israeli and Palestinian personal narratives about the past with contemporary museum exhibits, street plaques, tourism, and real estate projects that are reshaping the city since the decline of the peace process and the second intifada. What emerges is a portrayal of Jerusalem both as a local place with unique rhythms and topography and as a setting for national imaginaries and agendas with their attendant political and social tensions.

As sites of memory, Jerusalem’s homes, streets, and natural areas form the setting for emotionally charged narratives about belonging and rights to place. Recollections of local customs and lifeways in the mid-twentieth century coalesce around residents’ desire for stability amid periods of war, dispossession, and relocation—intertwining the mythical with the mundane. Hercbergs begins by taking the reader to the historically Arab neighborhoods of West Jerusalem, whose streets are a battleground for competing historical narratives about the Israeli-Arab War of 1948. She goes on to explore the connections and tensions between Mizrahi Jews and Palestinians living across the border from one another in Musrara, a neighborhood straddling West and East Jerusalem. The author rounds out the monograph with a semiotic analysis of contemporary tourism and architectural ventures that are entrenching ethno-national separation in the post-Oslo period. These rhetorical expressions illuminate what it means to be a Jerusalemite in the context of the city’s fraught history.

Overlooking the Border examines the social and geographic significance of borders for residents’ sense of self, place, and community, and for representations of the city both locally and abroad. It is certain to be of value to scholars and advanced undergraduate and graduate students of Middle Eastern studies, history, urban ethnography, and Israeli and Jewish studies.

Dana Hercbergs holds a PhD in folklore and folklife from the University of Pennsylvania. She has taught in universities in Canada and the United States and currently resides in Haifa.

A rich and evocative re-visiting of the two Jerusalems that ethnographically and analytically illuminates how Palestinians and Israelis (including the mizrahim) remember the divided city while simultaneously throwing light on the politics of contemporary Jerusalem and Israel/Palestine.

Through oral history, Dana Hergbergs, juxtaposes the city and its division through Palestinians’ and Israelis’ memories and narratives built on personal stories. It is an essential work to shed on a marginalized period, which is difficult to lay. Based on ethnography, Hergbergs relates past and contemporary Jerusalem around the 1948–67 border. Her analysis shows that division among the Palestinians and Israelis is beyond physical walls. Separation in Jerusalem manifests itself on the spatial level, as well as on the symbolic and historical narrative. In her primary work on interviews, she observes that to comprehend the dynamics around a non-existent border, there is a need to encompass other areas in order to unfold the dynamics of the conflict today.

Overlooking the Border: Narratives of Divided Jerusalem is an innovative work that will contribute across multiple fields. The overlapping meanings conveyed by its title inspire contemplation of the subject. Furthermore, a major contribution of the book is Hercbergs’ introduction of what I would term the transparency of asymmetry. She contributes to the uneven, "unstable ground" of an ethnographic inquiry that foregrounds storytellers from multiple locations and across enemy lines, where the ethnographer is a member of the occupying side, albeit a self-professed resistor to the occupation. Hercbergs unmasks the uneven treatment of the storytellers, the richness of the characters, and the structural development of the storyline on the Israeli side in contrast to the Palestinian side where, with the exception of a few trilingual storytellers, we rely on Hercbergs rather than the residents themselves to guide us. Although this may sound like a criticism, it is, in fact, praiseworthy and will deepen future ethnographies that are conducted across enemy lines by ethnographers who are born within a conflict on the side of the group in power. I hope that future works will theorize this concept in more detail.

On the whole, however, Hercbergs’s book adds rich description to scholarship already extant on Jerusalem’s social and visual landscape and provides some new insights and perspectives. The book also offers the reader a strong bibliography, useful footnotes, and excellent illustrations, including color photos and maps. It deftly blends ethnography with historical perspective and presents delightful behind-the-scenes looks at Jerusalem’s neighborhoods and residents. It is generally well written and remarkably readable, a feat not easily accomplished in the field of anthropology, and I recommend it for anyone interested in narrative and folklore of divided and religiously charged communities, as well as those who seek greater understanding of Jerusalem, its recent history, and its people(s) today.

Overlooking the Border offers a contribution that goes beyond presenting Jerusalem's popular narratives. It shows that the distance between ethnography and folklore and history is short. Just as political and military historians make use of state or military archives as primary sources, so too, social historians focusing on "history from below" are apt to find much value in the kind of popular narratives found in this book.