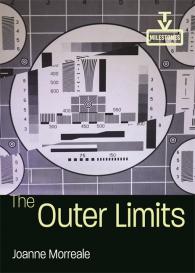 In this TV Milestone, author Joanne Morreale highlights the differences of The Outer Limits (ABC 1963–65) from typical programs on the air in the 1960s. Morreale argues that the show provides insight into changes in the television industry as writers turned to genre fiction—in this case, a hybrid of science fiction and horror—to provide veiled social commentary. The show illustrates the tension between networks who wanted mainstream entertainment and the independent writer-producers, Leslie Stevens and Joseph Stefano, who wanted to use the medium to challenge viewers.

In five chapters, The Outer Limitsmakes a case for the show’s deployment of gothic melodrama and science fiction tropes, unique televisual characteristics, and creative adaptation of many cultural sources to interrogate the relationship between humans and technology in a way that continues to influence contemporary debate in such shows as Star Trek, The X-Files, and Black Mirror. Underlying the arguments is the eerie notion of The Outer Limits as a disruptive force on television at the time, purposely making audiences uncomfortable. For example, in its iconic opening credit sequence a disembodied "Control Voice" claims to be taking over the television as images mimic signal interference. Other themes convey Cold War paranoia, ambivalence about the Kennedy era "New Frontier," and anxiety about the burgeoning military-industrial-governmental complex. The book points out that The Outer Limits presaged what came to be known as "quality" television. While most episodes followed the lowbrow tradition of televised science fiction by adapting previously published stories and films, the series elevated the genre by rearticulating it through themes and images drawn from myth, literature, and the art film.

The Outer Limits is lucid yet accessible, well researched and argued, with enlightening discussions of specific episodes even as it gives attention to broader television history and theory. It will be of special interest to scholars and students of television and media studies, as well as fans of science fiction.

Morreale’s focus on the relationship between humans and technology in The Outer Limits illuminates the extent to
which science fiction and horror continue to function as vessels of critical social commentary. Students and scholars
of television history will benefit from this accessible and engaging book, which both successfully positions The
Outer Limits as a television milestone and situates the show as an exemplar of the evolution of televisual form and
production.

Joanne Morreale does a marvelous job of giving this iconic but short-lived 1960s TV show its due. Morreale’s
meticulous research places the program into Kennedy-era social and political context, and her analysis connects its
pessimistic stories of technology’s disruption of human culture to recent hits like Black Mirror. The TV show that so
unnerved me as a kid (that opening!) is a prescient lens through which to question TV and media’s impact on us then
and now.

– Kathy Fuller-Seeley, professor in the Department of Radio-Television-Film, University of Texas at Austin