Home » Books » Our Lives Are But Stories 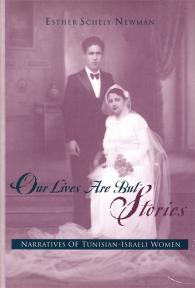 Our Lives Are But Stories

[She] writes with impressive scholarly integrity.

Our Lives Are But Stories explores the crucial role of personal storytelling in the lives of a unique generation of women—Jewish women who left the Muslim country of Tunisia to settle in the newly created Israeli state. To this day, the older generation of Tunisian Israelis continues to rely on storytelling as a form of education, entertainment, and socialization. But for women this art has taken on new dimensions, especially as they seek to impart their values to the young. Here Esther Schely-Newman expertly interweaves the personal accounts of the private lives of four Tunisian-Israeli women to analyze the rich complexities of communication. She considers how various approaches to narration reflect storytelling as a cultural phenomenon and highlights the need to understand stories in the contexts in which they are told.

The four narrators grew up in a culture in which women’s stories were confined to the private sphere, were usually told to other women, and were supposedly fiction—or at least metaphors masking their real lives. Forced migration to farming communities in Israel and the shock of being uprooted created new identities for women and new outlets for storytelling. Women narrators increasingly began to tell more openly of their personal lives. Schely-Newman organizes her narrators’ accounts by the themes of childhood, marriage, motherhood, immigration, and old age and considers a wide range of factors that shape the narration, including audience, intent, choice of language, and Jewish-Muslim culture. The result is a fascinating blend of analysis, narration, and history.

Esther Schely-Newman is a lecturer in the Department of Communication at the Hebrew University of Jerusalem.

Esther Schely-Newman's fascinating book approaches the narrative in terms of its primordial form - focusing on the almost personal and yet very collective writing of a group of Tunisian-born women who immigrated to Israel in the 1940s and 1950s...[She] writes with impressive scholarly integrity.

15 hours 53 min ago
Wayne State University President M. Roy Wilson with his teacher in high school. Check out this image and many more… https://t.co/W3kp1D7dFX
1 day 15 hours ago
HAPPY PUB DATE! Dan Gerber said "If you make yourself available to Cindy Hunter Morgan’s poems, they will revivif… https://t.co/L60dTqsUUj
2 days 11 hours ago
Grab your copy or e-book of @fkwang's YOU CANNOT RESIST ME WHEN MY HAIR IS IN BRAIDS today! https://t.co/htFDjNa9yj https://t.co/zHyt049441