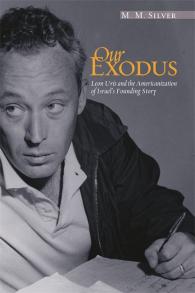 Leon Uris and the Americanization of Israel’s Founding Story

This is a timely, highly readable, and well-researched account of how the story of Israel's founding captured the American heart.

Despite the dramatic circumstances of its founding, Israel did not inspire sustained, impassioned public discussion among Jews and non-Jews in the United States until Leon Uris’s popular novel Exodus was released in 1958. Uris’s novel popularized the complicated story of Israel’s founding and, in the process, boosted the morale of post–Holocaust Jewry and disseminated in popular culture positive images of Jewish heroism. Our Exodus: Leon Uris and the Americanization of Israel’s Founding Story examines the phenomenon of Exodus and its largely unrecognized influence on post-World War II understandings of Israel’s beginnings in America and around the world.

Author M. M. Silver’s extensive archival research helps clarify the relevance of Uris’s own biography in the creation of Exodus. He situates the novel’s enormous popularity in the context of postwar America, and particularly Jewish American culture of the 1950s and early 1960s. In telling the story of the making of and the response to Exodus, first as a book and then as a film, Silver shows how the representation of historical events in Exodus reflected needs, expectations, and aspirations of Jewish identity and culture in the post-Holocaust world. He argues that while Uris’s novel simplified some facts and distorted others, it provided an astonishingly ample amount of information about Jewish history and popularized a persuasive and cogent (though debatable) Zionist interpretation of modern Jewish history.

Silver also argues that Exodus is at the core of an evolving argument about the essential compatibility between the Jewish state and American democracy that continues to this day. Readers interested in Israel studies, Jewish history, and American popular culture will appreciate Silver’s unique analysis.

M. M. Silver heads the general studies department at the Max Stern College of Emek Yezreel. His English and Hebrew publications on topics in Modern Jewish History include First Contact: Origins of the American-Israeli Connection. He has worked as a visiting scholar in several U.S. universities and lives with his family in the Galilee.

More than just a best-selling novel, Exodus by Leon Uris transformed how Americans thought about Israel and the Jews who fought, lived, and died to create a Jewish State. Now M. M. Silver, drawing on rich archival resources, gives us a compelling account of the making of the Exodus version of Jewish history and its gradual unraveling in the face of ongoing violence in the Holy Land. A must-read for anyone who wishes to understand the relationship to Israel of both American Jews and the United States."

– Deborah Dash Moore, director of the Jean and Samuel Frankel Center for Judaic Studies at the University of Michigan and editor of American Jewish Identity Politics

Our Exodus by M. M. Silver tells a riveting story that offers a convincing and incisive analysis of how Uris's book boosted the morale and pride of post-Holocaust American Jewry and spread positive images of Jewish heroism into popular American culture.

Silver's critical essay strikes a healthy balance between theory, analysis, and story-telling. . . He provides a comprehensive reading experience, offering insight into the life of Leon Uris, the history of Exodus 1947, and most engagingly, the rippling, layered effect of Uris's impressive novel on worldwide Jewry. M.M. Silver delivers a clarity and intimacy rarely found in a work of literary criticism.

Exodus, the book and the film, helped to shape America's image of the new State of Israel. It consciously linked brawny Zionist pioneers with the heroes of traditional American westerns. Now M. M. Silver gives us the story behind Exodus. This is a timely, highly readable, and well-researched account of how the story of Israel's founding captured the American heart."

Silver stresses that Leon Uris's great achievement lay in awakening a sense of pride and confidence in post-Holocaust American Jewry. And Leonid (Ari) Volvosky's saga buttresses his thesis that although Israel served as the focus of Exodus, its power lay in its being able to awake an ethnic identity among diaspora Jews. Matthew Silver's achievement is in writing a masterful account that explains why and how this came about."

This is an excellent, multi-layered explanation of how fiction can create history.

…Our Exodus is an impressive book. In this comparatively small volume, Silver manages expertly to knit together the history of a book, a film, and that of their progenitor, along with American Jewish history and Israeli history, into one single coherent and very interesting narrative. Beginning the book with a quote from Yerushalmi's classic Zakhor!, Silver traces the rise and fall of an influential, albeit short-lived, collective memory: from tracing Uris' construction of a 'usable past' to chronicling its decline once its usefulness had passed, Our Exodus is a compelling history of memory and forgetting."