Home » Books » Other Things Being Equal 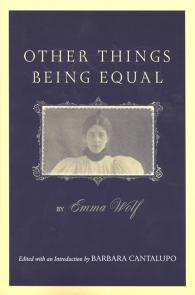 Other Things Being Equal

By Emma Wolf
Edited with an Introduction by Barbara Cantalupo

This new edition is an important work of literary recovery.

Widely regarded as a literary genius in her day, the Jewish American author Emma Wolf (1865-1932) wrote vivid stories that penetrated the struggles of women and people of faith, particularly Jews, at the turn of the twentieth century. This reissue of the 1916 revised edition of one of her most popular novels, Other Things Being Equal, first published in 1892, introduces Wolf to a new generation of readers, immersing them in an interfaith love story set in her native San Francisco in the late nineteenth century. The novel's protagonist, Ruth Levice, a young intellectual from an upper-class Jewish family, meets Dr. Herbert Kemp, a Unitarian, and falls in love. The novel's force lies in its unwillingness to adhere to ideological stands. A woman need not give up marriage and home to be strong, independent, and unconventional; a Jew does not have to be orthodox to remain close to her heritage and her faith.

Other Things Being Equal provides important insights into the American assimilationist tradition that is an essential context for the study of Jewish writing and culture at the turn of the century; at the same time, it expands our understanding of the range of women's writing in nineteenth-century America. Barbara Cantalupo's fine introduction illuminates the biographical and historical contexts that produced the novel. This new edition is an important work of literary recovery.

– Meri-Jane Rochelson, professor of English at Florida International University and author of <a href="http://wsupress.wayne.edu/books/913/A-Jew-in-the-Public-Arena">A Jew in the Public Arena: The Career of Israel Zangwill</a>