Home » Books » The Origins of the Modern Jew 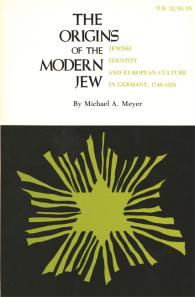 The Origins of the Modern Jew

By Michael A. Meyer

The most comprehensive volume in English on this most crucial of Jewish epochs.

Until the 18th century Jews lived in Christian Europe, spiritually and often physically removed form the stream of European culture. During the Enlightenment intellectual Europe accepted a philosophy which, by the universality of its ideals, reached out to embrace the Jew within the greater community of man. The Jew began to feel European, and his traditional identity became a problem for the first time. the response of the Jewish intellectual leadership in Germany to this crisis is the subject of this book.
Chief among those men who struggled with the problems of Jewish consciousness were Moses Mendelssohn, David Friedlander, Leopold Zunz, Eduard Gans, and Heinrich Heine. By 1824, liberal Judaism had not yet produced a vision of it future as a separate entity within European society, but it had been exposed to and grappled with all the significant problems that still confront the Jew in the West.

Professor Meyer has made a significant contribution to modern Jewish history by making the question of identity his central concern.

The most comprehensive volume in English on this most crucial of Jewish epochs.