Home » Books » The Origin of the Modern Jewish Woman Writer 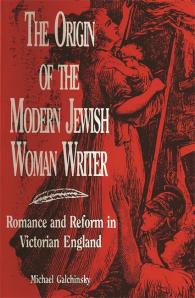 The Origin of the Modern Jewish Woman Writer

Romance and Reform in Victorian England

Between 1830 and 1880, the Jewish community flourished in England. During this time, known as haskalah, or the Anglo-Jewish Enlightenment, Jewish women in England became the first Jewish women anywhere to publish novels, histories, periodicals, theological tracts, and conduct manuals. The Origin of the Modern Jewish Woman Writer analyzes this critical but forgotten period in the development of Jewish women's writing in relation to Victorian literary history, women's cultural history, and Jewish cultural history.

Michael Galchinsky received his Ph.D. in English from the University of California at Berkeley. He teaches at Millsaps College in Jackson, Mississippi.