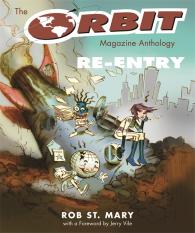 Rob St. Mary
With a Foreword by Jerry Vile

I love this anthology! Which also doubles as a fascinating secret history of Motor City punk.

With a mischievous globe-headed mascot that appeared in every issue and even on Quentin Tarantino’s T-shirt in Pulp Fiction, Orbit was an instantly recognizable arbiter of 1990s Detroit culture. But its irreverent tone and unique editorial features could be traced to two earlier local publications from creator Jerry Peterson, a.k.a. Jerry Vile—White Noise (1978–1980) and Fun: The Magazine for Swinging Intelectuals [sic] (1986–1990). In The Orbit Magazine Anthology: Re-Entry, author Rob St. Mary details the full run of White Noise, Fun, and Orbit, collecting two decades’ worth of Detroit’s alternative publishing history into an oversized, heavily illustrated volume that situates the publications in the city’s pop culture and media history.

St. Mary shows that while other alternative papers followed a tried-and-true focus on lefty politics and the arts, Vile’s publications found their niche in biting satire and sharp design that fed on popular culture. From the 70s punk scene in White Noise to audacious articles and irreverent "news" in Fun and a blend of reporting, satire, and culture in Orbit, St. Mary shows that Vile’s publications were distinctive in their content and uniquely Detroit in their tone. In sections devoted to each magazine, St. Mary details their recurring features (including dining, movie, and music reviews) and interviews former staffers. Numerous images and page spreads reveal the notable Detroit musicians—like Destroy All Monsters, the Gories, ICP, Jack White, Kid Rock, and Derrick May—and artists—including Niagara, Glenn Barr and Tristan Eaton—that graced their pages.

A foreword by Jerry Vile and an afterword by Ben Blackwell round out this one-of-a-kind volume. Anyone interested in Detroit arts and culture or the history of alternative publishing will be grateful for The Orbit Magazine Anthology.

Rob St. Mary is a Metro Detroit native and award-winning reporter. He has worked in radio newsrooms across Michigan and in Aspen, Colorado. He currently lives in Southeast Michigan with his two cats.

– Mark Binelli, author of Detroit City Is the Place To Be

Rob St. Mary's carefully researched look at Orbit and its roots in the Detroit punk scene takes you on a wild ride through the rude, riotous underbelly of local journalism in the 1980s and ’90s.

When Detroit's leaders get around to carving the Motor City’s Mt. Rushmore, Jerry Vile should occupy Washington’s spot. The Orbit Magazine Anthology is a compendium of Vile’s two-decade publishing legacy, from the paste-up White Noise music fanzine through the fully developed, hilariously ridiculous Orbit.Vile’s work was disruptive yet sincere in a city that needed such elements in the latter part of the twentieth century. Vile both feted and lampooned locals who deserved it and did it with a disarming, half-ass style that made you unaware of the genius in his journalistic terrorism.

Rob St. Mary knows how to have a good time—plunge into the high life of fun-seekers, artists, ne’er-do-wells, and cult favorites, with a journalist's precision and a bright pinch of eastside Detroit salt. Let him take you into Orbit!

– Kathe Koja, author of The Bastards’ Paradise, The Mercury Waltz, Under the Poppy, and several others