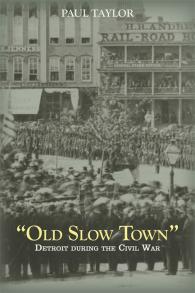 Detroit during the Civil War

Though it was located far away from Southern battlefields, Detroit churned with unrest during the American Civil War. The city's population, including a large German and Irish immigrant community, mostly aligned with anti-war Democrats while the rest of the state stood with the pro-Lincoln Republicans. The virulently anti-Lincoln and anti-Black Detroit Free Press fanned the city's flames with provocative coverage of events. In "Old Slow Town": Detroit during the Civil War, award-winning author Paul Taylor contends that the anger within Detroit's diverse political and ethnic communities over questions about the war's purpose and its conduct nearly tore the city in two.

Taylor charts Civil War­­-era Detroit's evolution from a quiet but growing industrial city (derisively called "old slow town" by some visitors) to a center of political contention and controversy. In eight chapters, Taylor details topics including the pre-war ethnic and commercial development of the city; fear and suspicion of "secret societies"; issues of race, gender, and economic strife during the war; Detroit's response to its soldiers' needs; and celebration and remembrance at the conclusion of the conflict. Taylor's use of rarely seen military correspondence from the National Archives, soldier and civilian diaries and letters, period articles and editorials from Detroit's Civil War-era newspapers, and his fresh, judicious synthesis of secondary sources results in a captivating depiction of Detroit's Civil War history.

Until now, why events occurred as they did in Detroit during the Civil War and what life was like for its residents has only been touched upon in any number of general histories. Readers interested in American history, Civil War history, or the ethnic history of Detroit will appreciate the full picture of the time period Taylor presents in "Old Slow Town."

'Old Slow Town' dives into the complex issues surrounding the Civil War era in Detroit, including slavery and race, the role of women, bitter conflicts over the Union war effort and goals, as well as the daily realities of a nation and people at war. This new contribution to Michigan history is vital for understanding the complex roles of Detroit's citizens and leaders during the Civil War years, as well as the larger story of the state's contribution to Union victory.

This smoothly-written and well-researched narrative is strongly recommended for anyone with an interest in the Civil War’s impacts on the home front or in the many crosscurrents that affected the residents of an increasingly important urban center.

In 'Old Slow Town,' Paul Taylor demonstrates an excellent grasp of the scholarship of this period of Detroit's history. He also includes an extensive and usable bibliography.

Taylor’s "Old Slow Town" (named for a derisive comment about Detroit at the beginning of the war) is a thoughtful, well-researched, and accessible study. It is replete with carefully-chosen historical quotations and includes numerous vignettes illustrative of the volume’s themes. Interesting photographs of Detroit individuals and scenes of the era are scattered through the text. A period street map of Civil War Detroit is reproduced inside the front and back covers. Scholars or other interested parties wishing to go further will find Taylor’s extensive bibliography to be an essential first stop. A very helpful index rounds out the volume. Readers will find that, in spite of the title, this book is anything but slow reading.

Drawing heavily from primary sources including newspapers, correspondence, and legislative records, this is a well-researched book by a scholar who is clearly deeply knowledgeable about the city and its history.

Based on extensive use of secondary sources in addition to an array of primary source material including diaries and letters, military records, and wide-ranging newspaper editorials, this study will further readers’ understanding of the dynamic between Detroit's citizens and its leaders during the war. Given the centrality and significance of Detroit to the state, "Old Slow Town" also adds to the larger story of Michigan’s contribution to Union victory. This book will especially appeal to readers interested in the Northern home front during the Civil War, urban and local history, and the history of Michigan in general and of Detroit in particular.

3 hours 25 min ago
THE FORGOTTEN IRON KING OF THE GREAT LAKES by Michael Nagle is a biography about a Gilded Age industrialist who bec… https://t.co/IPgcetjlui
23 hours 53 min ago
HAPPY NATIONAL BOOK LOVERS DAY! In celebration of today, comment your current favorite book or something that you… https://t.co/SqfUAeiLHy
1 day 2 hours ago
QUEERING ANTI-ZIONISM by Corinne E. Blackmer is a queer critique of anti-Zionism, exploring how the Boycott, Divest… https://t.co/jk8OUUN7ku