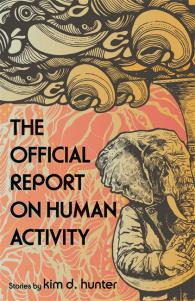 The Official Report on Human Activity

The Official Report on Human Activity by kim d. hunter, which is neither official nor a report, is a collection of long stories that are linked by reoccurring characters and their personal struggles in societies rife with bigotry, in which media technology and capitalism have run amok. These stories approach the holy trinity of gender, race, and class at a slant. They are concerned with the process and role of writing intertwined with the roles of music and sound.

The four stories range from the utterly surreal—a factory worker seeking recognition for his writing gives birth to a small black elephant with a mysterious message on its hide—to the utterly real—a nerdy black teen’s summer away from home takes a turn when he encounters half-white twins on the run from the police. Prominently known as a Detroit poet, hunter creates illusions and magic while pulling back the curtain to reveal humanity—the good, bad, and absurd. Readers will find their minds expanded and their conversations flowing after finishing The Official Report on Human Activity.

The Official Report on Human Activity is sure to appeal to readers of literary fiction, particularly those interested in postmodernism and social justice.

kim d. hunter has published two collections of poetry: borne on slow knives and edge of the time zone. His poetry appears in Rainbow Darkness, What I Say, Black Renaissance Noire, 6X6 #35, and elsewhere. He received a 2012 Kresge Artist Fellowship in the Literary Arts and he works in Detroit providing media support to social justice groups.

kim hunter's foray into speculative fiction propels us into a curious and wildly imagined text that concerns a not-too-distant world full of probes, implants, holograms, and hybrid living forms. The characters in The Official Report on Human Activity enter our consciousness with astounding presence. And like the blues, which runs on the crest of a human wound, the deep song heard in a storm makes rescue possible. For all the strangeness of this book, the solace of music, and, by extension, of all art is what carries us through.

The Official Report on Human Activity is that strange, compelling, admixture—part Franz Kafka, part Samuel Delaney, and part Percival Everett—discerning readers often seek but rarely find. This collection of short fiction ushers in a voice new only to audiences outside the Midwest where many of us have been reading kim hunter, one of our best kept secrets, for years.

1 day 6 hours ago
In THE ENCHANTED BOOT, Nancy L. Canepa encourages a revisitation of the fairy-tale canon with this fascinating anth… https://t.co/qzfMsEAyvv
2 days 7 hours ago
FEARLESS VULGARITY by Ken Feil discusses "Valley of the Dolls" author Jacqueline Susann’s camp comedy and legacy.… https://t.co/XLUcIGCyWD
2 days 8 hours ago
RT @WSUHumClinic: Stay informed on what's new and next from the @WSUPress... Nothing Special by Desiree Cooper (available this Oct.)… https://t.co/0zNnngDSS1