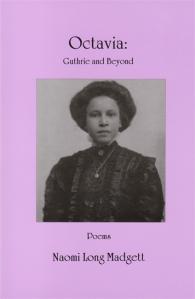 Haunted by her physical likeness to an aunt who died before she was born, the author developed an early sense of identification with Octavia, feeling almost as if she were her aunt reincarnated. Many of the poems are based on old family letters and photographs and information gleaned from the author’s visit to Guthrie, OK. Following the poems are family photographs and biographies.

Octavia was co-winner of the 1988 Creative Achievement Award sponsored by the College Language Association and the subject of a documentary film, A Poet’s Voice (Vander Films), which won a Gold Apple Award of Excellence from the National Educational Media Network. Octavia was also made required reading in all Detroit public high schools.

Naomi Long Madgett grew up in East Orange, NJ, St. Louis, MO, and New Rochelle, NY. She has been a resident of Detroit, MI since 1946. She earned her B.A. from Virginia State University (1945), her M.Ed. from Wayne State University, and her Ph.D. from the International Institute for Advanced Studies (1981). She is the author of ten books of poetry, the first published when she was seventeen years old, two textbooks, and an autobiography and editor of two anthologies. She is also the founder and publisher/editor of Lotus Press, Inc., established in 1972. Since 2001 she has been Poet Laureate of the City of Detroit. She is also Professor of English Emeritus at Eastern Michigan University.

The book contains one line drawing by Leisia Duskin, a graphic designer and educator specializing in print and web media. She is also an illustrator and teaches graphic design at the secondary and college level. She is a native and resident of Detroit and a graduate of the College for Creative Studies. She was born in Detroit on September 15, 1960 and is a US citizen.