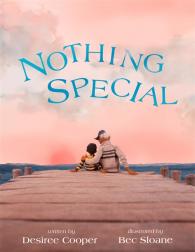 Six-year-old Jax can’t wait to leave Detroit and spend a week with his grandparents in coastal Virginia, where he’s sure he’ll be spoiled with the kinds of special things he enjoys at home: toys, movies, and hamburgers. As he dreams of the adventures he’ll have, his PopPop has other ideas. He fills their days with timeless summer fun—crabbing, shucking corn, and counting fireflies.

Illustrated entirely of repurposed textiles, Nothing Special celebrates the enduring connection between the generations who stayed in the South and the millions of emigrants for whom it will always be home. Between 1910 and 1970, more than six million African Americans left the Jim Crow South, but they never forgot the culture, the land, and the family they left behind. In the decades since, it has become a summer ritual for many black families to reverse the journey and return South for a visit to their homeplaces.

Desiree Cooper is a 2015 Kresge Artist Fellow, award-winning journalist, and community activist. She is a widely published essayist and the author of Know the Mother (Wayne State University Press). She is raising her three grandchildren in coastal Virginia.

Bec Sloane is an educator, production designer, and animator working primarily in textiles and tactile media. She writes for various publications, bridging awareness gaps and encouraging cross-sector collaboration with a focus in agroecology and immigrant justice.

"Nothing Special is a lovely story capturing the beautiful relationship a child can have with his grandparent - and how time together with loved ones can exceed your wildest expectations. With mesmerizing artwork and warmth reverberating within each page, this is a book to be read and cherished with the ones you love."

Desiree Cooper’s Nothing Special reminds us that the simplest things in life are the ones that mean the most, especially when accompanied by love. Bec Sloane’s exuberant illustrations evoke a vivid patchwork dream quilt. A treasure!

Contrary to its title, Nothing Special is both a loving reminder of a family’s cultural roots and the simple pleasures of life. Wrapped in a story of multiple generations coming together, it’s a warm love letter to the grandparent/grandchild relationship.

Nothing Special is a visual treat that invites viewers into a handcrafted world, cleverly created with fabric and other found objects. Each scene is filled with a playful spirit that emphasizes the growing bond between young Jax and his grandparents.

– Salley Mayor, illustrator of My Bed: Enchanting Ways to Fall Asleep around the World

Such a heartwarming story. Soft childhood memories of visits with grandparents have been brought to life so beautifully in handcrafted textures. All the little details make me want to touch the page!

The inventive and unique illustrations in Nothing Special perfectly complement the warmth of this story about a childhood rite of passage familiar to many African Americans—summers spent revisiting our southern roots. Nothing Special is a joy to experience!

– Constance Moore, illustrator of Brown: The Many Shades of Love and Black: The Many Wonders of My World

As young Jax gets an unexpected taste of his grandfather’s boyhood, readers get a treat in this beautiful book. Desiree Cooper’s wonderful storytelling celebrates the bond between children and family elders, while Bec Sloane’s amazing illustrations bring Nothing Special to vibrant life. Together, they create an incredibly special experience, indeed!

Nothing Special invites connection through simple pleasures in the company of family we might not know so well, but we know love us. Sometimes we worry when we leave the familiar foods and activities of home, but like Jax, we discover so many wonderful things when we do.

This story of black family love is disarming in its simplicity: young Jax has traveled south for a summer visit with his grandparents, and he unwittingly becomes immersed in the joys and adventures that are part of the life of his beloved PopPop and Nana. Desiree Cooper’s use of language and rhythm is captivating. And she creates a scenario that can be treasured across generations and cultures as Jax emerges with an appreciation for life’s simple pleasures.

– Jean Alicia Elster, author of Who’s Jim Hines?, The Colored Car, and How It Happens

This heart-warming and gently paced story is a perfect read aloud, sure to be a bedtime (or any calm-down time) favorite. Kids will feel welcomed along on Jax’s visit to his grandparents' Virginia home, and will marvel at the tactile crafted art, which literally stitches together the theme that there's just ‘something special’ in taking the time for homemade fun.