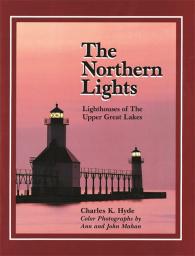 Lighthouses of the Upper Great Lakes

If you're looking to thoroughly acquaint yourself with [historic lighthouses], go in the direction of this well-researched book, containing more than 200 color photographs, plus maps.

Symbols of safety, reassurance, and guidance, lighthouses hold a special fascination for many people. On the Great Lakes, lighthouses—"northern lights"—helped to open the region to settlement and support the growth of commercial trade. Charles K. Hyde describes the histories of more than 160 individual lighthouses that still exist on Lakes Erie, Huron, Michigan, and Superior and the straits of Mackinac. As the shipping industry flourished, so too did the necessity for lighthouses. With their proliferation came a demand for more sophisticated structures. Hyde describes the changing design of lighthouses and the equipment that produces their beacons. Featuring over two hundred color photographs, The Northern Lights captures the beauty, history, and significance of lighthouses on the Great Lakes and illuminates the rich maritime history of the region.

Charles K. Hyde is a native of Pittsfield, Massachusetts. He earned his Bachelor of Arts degree from the University of Massachusetts-Amherst in 1966 and his Ph.D. in history from the University of Wisconsin-Madison in 1971. He is a retired professor of history at Wayne State University, where he had been on the faculty since 1974. His main areas of interest are the history of technology, industrial history, and industrial archaeology. He resides in Royal Oak, Michigan. Professor Hyde's publications include a two-volume inventory of historic engineering and industrial sites and structures in Michigan; Old Reliable, An Illustrated History of the Quincy Mining Company (Four Corners Press, 1982), with Larry Lankton; and Historic Highway Bridges of Michigan (Wayne State University Press, 1993). He has also written on the history of the Detroit automobile industry and is currently working on a history of the American copper mining industry.

John and Ann Mahan are free-lance photographers and writers who specialize in the Great Lakes and their watersheds. They live near Gaylord, Michigan, with their two daughters, Jennifer and Kristen, who often accompany them on their travels. Their work has appeared in many magazines, including Audubon, Backpacker, National Geographic, Outdoor Photographer, Outside, Sierra, and Smithsonian and in books by the National Geographic Society, North Word, Reader's Digest Association, Sierra Club, Voyageur Press, and others. They are the authors and photographers for Wild Lake Michigan (Voyageur Press, 1991), and a book on Lake Superior scheduled for publication in 1996.

If you're looking to thoroughly acquaint yourself with [historic lighthouses], go in the direction of this well-researched book, containing more than 200 color photographs, plus maps . . . You'll also get to look in on some real-life lighthouse keepers of long ago and their families.

10 min 32 sec ago
TONIGHT! Join @stephanie_heit at @ShopBooksweet for local author's night! https://t.co/pTny5OErDe
21 hours 53 min ago
Have you had a chance to check out our new Spring & Summer 2023 Catalog?! From a new lyric essay collection to a p… https://t.co/cNAo9WjL9K
1 day 20 hours ago
RT @shondabuchanan: Tonight! Feb. 1, 2023, 6:30pm Mountain Time -- Virtual reading for #lewisandclarklibrary Lewis & Clark Library in H… https://t.co/UAmMoIlq1w