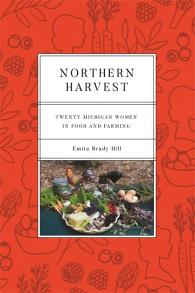 Northern Harvest: Twenty Michigan Women in Food and Farming looks at the female culinary pioneers who have put northern Michigan on the map for food, drink, and farming. Emita Brady Hill interviews women who share their own stories of becoming the cooks, bakers, chefs, and farmers that they are today—each even sharing a delicious recipe or two. These stories are as important to tracing the gastronomic landscape in America as they are to honoring the history, agriculture, and community of Michigan.

Divided into six sections, Northern Harvest celebrates very different women who converged in an important region of Michigan and helped transform it into the flourishing culinary Eden it is today. Hill speaks with orchardists and farmers about planting their own fruit trees and making the decision to transition their farms over to organic. She hears from growers who have been challenged by the northern climate and have made exclusive use of fair trade products in their business. Readers are introduced to the first-ever cheesemaker in the Leelanau area and a pastry chef who is doing it all from scratch. Readers also get a sneak peek into the origins of Traverse City institutions such as Folgarelli’s Market and Wine Shop and Trattoria Stella. Hill catches up with local cookbook authors and nationally known food writers. She interviews the founder of two historic homesteads that introduce visitors to a way of living many of us only know from history books.

These oral histories allow each woman to tell her story as she chooses, in her own words, with her own emphasis, and her own discretion or indiscretions. Northern Harvest is a celebration of northern Michigan’s rich culinary tradition and the women who made it so. Hungry readers will swallow this book whole.

Born in Baltimore and a New Yorker since 1969, Emita Brady Hill has spent her summers in Traverse City since her childhood. She earned her doctorate in romance languages and literatures from Harvard University and in 2019 was awarded an honorary doctorate in humane letters by Indiana University. Her career as a scholar of the French Enlightenment took her to France, where she discovered French and North African cuisines, an interest that led to her study of the many aspects of food and farming in northern Michigan.

Northern Harvest is a truly magical book that celebrates the food culture of northern Michigan. Through the voices of each woman, Hill shows how as farmers, fruit growers, chefs, bakers, and cheese makers, they transformed their region ‘into a culinary and agricultural Eden,’ an act that ‘was a labor of love and an act of faith.’ To combat Michigan’s cold, dark winter days, Angela Macke created an herbal ‘Sun in the Winter’ tea from lemon myrtle, cherries, and hibiscus. Northern Harvest is a wonderfully animated book that celebrates northern Michigan and twenty women who have transformed its worlds into a uniquely rich food mecca.

In this joyous book, twenty groundbreaking food and farm adventurers share how they turned toward land, sustainability, and artisanal work. Hill has captured these uplifting and inspiring oral herstories, showcasing in their own voices a deep connection to soil, culture, and people. In breadth and depth, these women reflect the spirit of northern Michigan.

I heard beautiful voices filled with compassion and uncommon honesty. It is a celebration of life’s pathways, from fields and kitchens onto our tables, by a distinctive group of agricultural and food pioneers—all women. These powerful and important stories need to be told and preserved. They embody the American tradition of cultural diversity and offer inspiration in uncertain times. Emita has given us a distinctive treasure to savor with each ‘bite’ and story. I loved every page and am so grateful to have read it.

Two of my favorite books of all time are oral histories—Howell Raines’s My Soul Is Rested (about the Civil Rights movement of the mid-twentieth century), and Paul Avrich’s Anarchist Voices. I’m now adding Northern Harvest to that list—it’s a third oral history that beautifully captures the down-to-earth, honest elegance and insight of the women who have led the way in transforming northern Michigan from a near food desert to one of the most bountiful sources of artisan food anywhere in the country. You probably won’t recognize any of the names of the key characters in this book. But that’s the point of an oral history and why I love it so much. Because instead of headline news, you come to know what life was really like for the people who were doing the work, far, far from the headlines and spotlights of the food world in New York or San Francisco. Hill’s book brings us the stories of this beautiful, so-far-from-anywhere corner of northern Michigan. The women in Northern Harvest have done more to make the food revolution in this country what it is than anyone. As Julia Brabenec, one of the women in the book says, ‘This was our life, and we loved it.’

Northern Harvest is a bit of a miracle—it is founded on Love. I remember Bronx Faces and am pleased to know we are now celebrating the women. Women are the trees holding the Earth—we are the Love holding the Heart. We are strong and sweet and organic. Good for us.

Northern Harvest: Twenty Michigan Women in Food and Farming offers delightful stories, hope for the future, and is a most timely contribution to the literature and history of a beautiful region of our country.

Author Next Door interview via National Writers Series (May 1, 2020)

14 hours 2 min ago
HAPPY NATIONAL BOOK LOVERS DAY! In celebration of today, comment your current favorite book or something that you… https://t.co/SqfUAeiLHy
16 hours 56 min ago
QUEERING ANTI-ZIONISM by Corinne E. Blackmer is a queer critique of anti-Zionism, exploring how the Boycott, Divest… https://t.co/jk8OUUN7ku
17 hours 9 sec ago
@WSUHumClinic It was such a pleasure to have you here, Carly!