Home » Books » No Place in Time 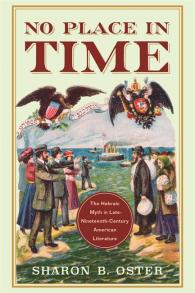 No Place in Time

No Place in Time: The Hebraic Myth in Late-Nineteenth-Century American Literature examines how the Hebraic myth, in which Jewishness became a metaphor for an ancient, pre-Christian past, was reimagined in nineteenth-century American realism. The Hebraic myth, while integral to a Protestant understanding of time, was incapable of addressing modern Jewishness, especially in the context of the growing social and national concern around the "Jewish problem." Sharon B. Oster shows how realist authors consequently cast Jews as caught between a distant past and a promising American future. In either case, whether creating or disrupting temporal continuity, Jewishness existed outside of time.

No Place in Time complicates the debates over Eastern European immigration in the 1880s and questions of assimilation to a Protestant American culture. The first chapter begins in the world of periodicals, an interconnected literary culture, out of which Abraham Cahan emerged as a literary voice of Jewish immigrants caught between nostalgia and a messianic future outside of linear progression. Moving from the margins to the center of literary realism, the second chapter revolves around Henry James’s modernization of the "noble Hebrew" as a figure of mediation and reconciliation. The third chapter extends this analysis into the naturalism of Edith Wharton, who takes up questions of intimacy and intermarriage, and places "the Jew" at the nexus of competing futures shaped by uncertainty and risk. A number of Jewish female perspectives are included in the fourth chapter that recasts plots of cultural assimilation through intermarriage in terms of time: if a Jewish past exists in tension with an American future, these writers recuperate the "Hebraic myth" for themselves to imagine a viable Jewish future. No Place in Time ends with a brief look at poet Emma Lazarus, whose understanding of Jewishness was distinctly modern, not nostalgic, mythical, or dead.

Sharon B. Oster is professor of English at the University of Redlands. Her essays on American, Jewish, and Holocaust literature have appeared in English Literary History and Prooftexts.

Although focused on distinctive turn-of-the-century issues and texts, No Place in Time reaches back through American and European history to illuminate both the continuities and frictions produced when Hebraic myths and ideas collided with the nation’s deeply ingrained Protestantism. In addition to her wide-ranging and fresh analysis of many of the era’s key authors, Oster has made a groundbreaking contribution to the wider field of literature and religion, as well as to our understanding of the process of secularization.

Sharon B. Oster’s No Place in Time persuasively argues for the centrality of Jewish histories in American thought, and deftly examines the different temporalities of Jewishness in American literature. For all its creative insight and critical intervention, Oster’s elegantly composed, stylishly written argument seems all but inevitable. Oster’s introduction alone will transform how we hinge the categories ‘American literature’ and ‘Jewish literature,’ and her original readings of canonical authors persuasively reexamine the ideological bases of American literary Realism.

Moving far beyond familiar assertions of philo- and antisemitism in turn-of-the-century American writing, Sharon B. Oster's splendid book shows how, for writers from James and Wharton to Cahan and Yezierska, the figure of the Jew offered a way to think through and reframe modern conceptions of temporality. The result is a study that makes a powerful, beautifully argued case for the centrality of writing Jewishness to an entire, crucial era in American literary and cultural history.

Beginning with the trope of the ‘noble Hebrew,’ No Place in Time shows philo-semitism and antisemitism to be twin conceits in late-nineteenth, early-twentieth-century American life and thought. In establishing a richly figured and carefully researched dialogue among Jewish and non-Jewish writers, Oster paints a portrait of a complex and fraught period in American history and literature, one that resulted in a redefinition and renegotiation of identity and place. In contextualizing Jewish immigration in terms of literary modernity, Oster persuasively demonstrates the ways in which past mythologies and histories have come to shape the future.

No Place in Time offers a bold, theoretical refiguring of American literary typology, recasting a national religious mythology from the perspective of Jewish American literary history. With fresh and penetrating scholarship, Oster hits all the central but critically evasive literary categories embedded in the nation’s Protestant imaginary. She reorients our understanding to such thematic touchstones as secularism, modernity, millennialism, religious determinism, trans-diasporic memory, and messianism in the works of writers culturally or cooptively inflected by Rabbinical tradition and Jewish immigrant culture. This story of the pluralities and contradictions in the literary formation of the ‘American’ self is as relevant today as it was more than a century ago.

Full of splendid insight and erudition, No Place in Time offers a striking new way to understand American literary realism. By focusing on how the figure of the ‘noble Hebrew’ implanted notions of sacred time into a genre long considered resolutely secular, Sharon B. Oster shows how Jewishness was a central element of the way realist writers––Jewish and non-Jewish writers alike––mediated the fractured nature of modern American life and struggled to imagine a redemptive future. Oster has written a truly accomplished and important book.

[Oster's] analyses point to something distinctly new under the sun.

No Place in Time is rife with insightful readings of key literary and historical texts. It is a valuable project for rethinking the poetics and politics of American realism through the lens of time. Oster’s exploration of various authors who sought to disrupt "realism’s own historicity" by introducing various modes of "religious, sacred time" invites us to transcend the binary between secular and sacred time and to acknowledge the modernist qualities that, to varying degrees, these works all possess. Overall, this is a thoughtful and impressive book, one that will be useful to scholars working in Jewish studies, American studies, and novel theory. It provides a foundational discussion of how Jewishness was timed during the mass migration era and beyond, and it traces the socio-aesthetic grammars that determined, to use Oster’s language, how the story of the Jew in time can be told.

This highly recommended book will be equally useful for scholars of Jewish American culture and folks just interested in the peculiar ways Jews have been and continue to be perceived in America. No Place in Time illuminates the great promise of Jewish renewal in the twentieth century, a process that, Oster shows, continues, however fitfully, to this day.