Home » Books » Of No Interest to the Nation 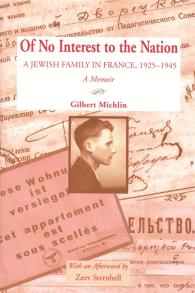 Of No Interest to the Nation

Gilbert Michlin’s sober text thoroughly documents the story of a Jewish immigrant family in France during the war years. Known as the country of enlightenment and human rights, France drew many Jews from Eastern Europe in the early twentieth century, including Michlin’s parents, who fled the harsh conditions of Poland in the mid-1920s. Michlin’s memoir evokes the golden years of his family’s life in prewar Paris, where he was born, but also reflects on the difficulties of being Jewish in France. His father learned this when French authorities rejected his request for naturalization on the symbolic pretext that he was "of no interest to the nation." The rise of Nazi Germany, the German occupation of France, and the advent of the Vichy government and its anti-Jewish laws would soon follow, and in 1944 the Michlin family would be deported to Auschwitz.

Very little memoir material is available in English detailing either the French Jewish experience during World War II or the experience of immigrants in France in the 1930s. Of No Interest to the Nation is a valuable book for students and scholars of Jewish and European history, the Holocaust, and European immigration during the first half of the twentieth century. First published in France in 2001, this translation also includes an afterword by Israeli scholar Zeev Sternhell, which provides incisive comments that place Michlin’s memoir within the larger context of contemporary French history.

After surviving Auschwitz, Gilbert Michlin emigrated from France in 1946 to live with his uncle in the United States. He was a mathematical engineer, retired from IBM.

A very powerful and a very moving account of a remarkable survival."

Michlin has the same understated, dignified, and ostensibly uncomplicated way of speaking about his Shoah experience as has Primo Levi. What we read here, however, tells us a great deal about French anti-Semitism and the workings of the Vichy government. . . . His is an important testimony, one that breaks my heart."

– Judith Graves Miller, chair of the Department of French at New York University

In his richly textured memoir, Gilbert Michlin tells the story of his and his parents' experience in interwar France and in the Nazi death camps, from which Gilbert alone returned. His text is of particular interest to historians because he delved into archival sources to better understand the how and why of his family's tragic twentieth-century Jewish saga. Michlin's memoir provides us with fascinating evidence of how immigrant Jews in the interwar years blended their desire for integration with their attachment to their Jewish heritage.