Home » Books » No Haven for the Oppressed 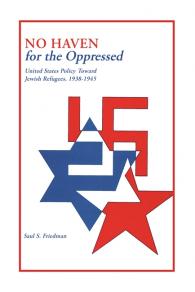 No Haven for the Oppressed

No Haven for the Oppressed is the most thorough and the most comprehensive analysis to be written to date on the United States policy toward Jewish refugees during World War II. Friedman draws upon many sources for his history, significantly upon papers which have only recently been opened to public scrutiny. These include State Department Records at the National Archives and papers relating to the Jewish refugee question at the Roosevelt Library at Hyde Park. Such documents serve as the foundation for this study, together with the papers of the American Friends Service Committee, of Rabbis Stephen Wise and Abba Silver, Senator Robert Wagner, Secretary Hull and Assistant Secretary of State Breckinridge Long, of the American Jewish Archives, the National Jewish Archives, and extensive interviews with persons intimately involved in the refugee question.

Professor Friedman describes America's pre-war preoccupation with economic woes: immigrants, particularly Jewish immigrants, were viewed as competitors for scarce jobs. President Franklin D. Roosevelt, although personally sympathetic to the dilemma of Jews, was not willing to risk public and congressional support for his domestic programs by championing legislation or diplomacy to increase Jewish immigration. The court-packing scandal and the unsuccessful purge of Southern Democrats had left his popularity at an all-time low.

Jewish leaders were equally unwilling to antagonize the American public by strong advocacy of the Jewish cause. They feared anti-Semitic backlash against American Jews and worried that their own "100 percent" loyalty to the nation might be questioned.

Although he takes issue with authors who propose that anti-Semitism at the highest levels of the State Department was the major block to the rescue of the Jews, Friedman demonstrates that some officials continually thwarted rescue plans. He suggests that a disinclination to sully themselves in negotiations with the Nazis and a fear that any ransom would prolong the global conflict, caused the Allies to offer only token overtures to the Nazis on behalf of the Jews.

Saul S. Friedman was a professor of Ancient and Near Eastern History at Youngstown State University in Ohio. Among the earliest American scholars of the Holocaust, Friedman founded the Center for Judaic and Holocaust Studies at Youngstown, and half of the dozen books he authored focused on Jewish history and Jewish experience in the United States. His documentaries on Jewish and the Holocaust received five regional Emmy Awards. Friedman retired from Youngstown in 2006, and passed away in 2013.