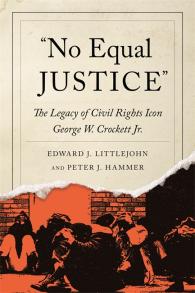 "There is no equal justice for Black people today; there never has been. To our everlasting shame, the quality of justice in America has always been and is now directly related to the color of one’s skin as well as to the size of one’s pocketbook." This quote comes from George W. Crockett Jr.’s essay, "A Black Judge Speaks" (Judicature, 1970). The stories of Black lawyers and judges are rarely told. By sharing Crockett’s life of principled courage, "No Equal Justice" breaks this silence.

The book begins by tracing the Crockett family history from slavery to George’s admission into the University of Michigan Law School. He became one of the most senior Black lawyers in President Franklin Roosevelt’s New Deal administration. Later, he played a central role fighting discrimination in the United Auto Workers union. In 1949, he became the only Black lawyer, in a team of five attorneys, defending the constitutional rights of the leaders of the U.S. Communist Party in United States v. Dennis, the longest and most dramatic political trial in American history. At the close of the case, Crockett and his defense colleagues were summarily sentenced to prison for zealously representing their clients. He headed the National Lawyers Guild office in Jackson, Mississippi, during 1964’s Freedom Summer. In 1966, he was elected to Detroit’s Recorder’s Court—the court hearing all criminal cases in the city. For the first time, Detroit had a courtroom where Black litigants knew they would be treated fairly. In 1969, the New Bethel Church Incident was Crockett’s most famous case. He held court proceeding in the police station itself, freeing members of a Black nationalist group who had been illegally arrested. In 1980, he was elected to the United States Congress where he spent a decade fighting President Reagan’s agenda, as well as working to end Apartheid in South Africa and championing the cause to free Nelson Mandela.

Crockett spent his life fighting racism and defending the constitutional rights of the oppressed. This book introduces him to a new generation of readers, historians, and social justice activists.

Peter J. Hammer is the A. Alfred Taubman Professor of Law and director of the Damon J. Keith Center for Civil Rights at Wayne State University Law School.

Edward J. Littlejohn is professor emeritus of law at Wayne State University Law School. He is the founder of the Damon J. Keith Law Collection of African-American Legal History at the Walter P. Reuther Library.

In 1949, George W. Crockett Jr., as a Black lawyer, was one of five who defended the constitutional rights of the leaders of United States Communist Party. This criminal trial, then America’s longest and most important, ended with contempt citations – Crockett served four months in a segregated Kentucky prison. Later, in 1952, he and his partner, Ernie Goodman represented most of those called before the House Un-American Activities Committee in Detroit, including future mayor, Coleman A. Young. Early on a Saturday morning, in 1969, Crockett, while a Detroit Recorder’s Court judge, went to Detroit Police Headquarters with writs of habeas corpus and began arraignments freeing most of the 142 men, women and children illegally arrested after a shoot-out at the New Bethel Baptist Church. After I became a lawyer in1970, I practiced law before this brilliant and ethical jurist. He respected the civil liberties of everyone regardless of race, religion or political affiliations. He became my mentor and I managed his 1980 campaign for the U.S. Congress. This superb and long overdue book is for young and older readers of law, history and biography. It instructs on what was and how a determined person can make positive differences in the lives of others. It is a quintessential must read.

"No Equal Justice": The Legacy of Civil Rights Icon George W. Crockett Jr. makes abundantly clear that this dedicated life led by George Crockett Jr. must not be forgotten lest we forget our own history and disregard the roadmap George Crockett’s life is in this struggle for justice. While George Crockett’s life could stand for how elusive justice can be and how history repeats itself, Professors Littlejohn and Hammer successfully make the case for how we must stay encouraged in the struggle, and how we can draw inspiration from the giant warrior that George Crockett was. These authors bring George Crockett, Jr. back to life - to educate and inspire a new generation of social activists, judges, and all who are invested in eradicating racism from our institutions, hearts, minds, streets and courtrooms. I commend "No Equal Justice" to anyone who must be encouraged, strong and courageous.

George Crockett was a man of extraordinary courage, character, and conscience. Unwavering and impactful in his efforts to create a more just America - and to end to apartheid in South Africa, his life set a standard to which persons of conscience should aspire. This book shows what it means to be a person of principle and consequence, and should be read by all who wish to better understand the searing battles that led to the rights to which Blacks have access today."

George Crockett is an inspiration for freedom fighters everywhere, and it’s an honor to carry on his legacy of working for the people in Congress. A true people’s lawyer, his life serves as a model of courageous, unflinching advocacy, and it’s long past due that new generations learn about his pioneering civil rights and social justice work.

George W. Crockett Jr., who represented my father and Coleman Young during the Red Scare hearings in Detroit, was a hero in my family, but more important was a vital and underappreciated figure in the fight for social and racial justice in America. I am thrilled that his courageous story is finally being told.

– David Maraniss, Pulitzer Prize-winning author of A Good American Family: The Red Scare and My Father