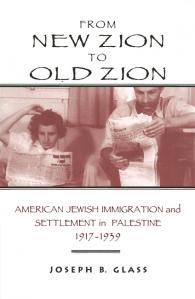 From New Zion to Old Zion

American Aliyah (immigration to Palestine) began in the mid-nineteenth century fueled by the desire of American Jews to study Torah and by their wish to live and be buried in the Holy Land. His movement of people-men and women-increased between World War I and II, in direct contrast to European Jewry’s desire to immigrate to the United States. Why would American Jews want to leave America, and what characterized their resettlement? From New Zion to Old Zion analyzes the migration of American Jews to Palestine between the two world wars and explores the contribution of these settlers to the building of Palestine.

From New Zion to Old Zion draws upon international archival correspondence, newspapers, maps, photographs, interviews, and fieldwork to provide students and scholars of immigration and settlement processes, the Yishuv (Jewish community in Palestine), and America-Holy Land studies a well-researched portrait of Aliyah.

Joseph B. Glass is a researcher and academic coordinator at the Halbert Centre for Canadian Studies at Hebrew University of Jerusalem. He is co-author with Ruth Kark of Sephardi Entrepreneurs in Eretz Israel, the Amzalak Family, 1816 – 1918.

3 hours 53 min ago
Happy Pub Date to THE SPOOK WHO SAT BY THE DOOR, SECOND EDITION! This new edition of a literary classic now includ… https://t.co/XrCsLZvf4D
3 hours 56 min ago
RT @DarkProjections: Returned from a great two weeks in Europe to find copies of my new book! Kolchak:The Night Stalker, one of the Pion… https://t.co/kPJ5kKLRyr
1 day 52 min ago
RT @oneitadetroit: Thrilled that @WSUPress is releasing the 2E of Sam Greenlee's "The Spook Who Sat by the Door" tomorrow. Introductio… https://t.co/hZpAjxluIl