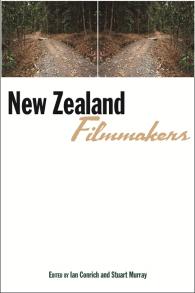 New Zealand Filmmakers is a necessary contribution to film studies.

This volume contains twenty in-depth studies of prominent New Zealand directors, producers, actors, and cinematographers. New Zealand Filmmakers outlines and examines three major constituent groups who are responsible for the industry as it appears today: those involved in pioneering film in New Zealand, those associated with the New Wave of the 1970s and 1980s, and those post–mid-1980s visionaries and fantasists who have produced striking individual productions. A comprehensive introduction situates the New Zealand film industry in cultural, historical, and ideological contexts.

The book displays the diversity of filmmaking in New Zealand and highlights the specific industrial, aesthetic, and cultural concerns that have created a film culture of international significance. With the majority of the contributions in the book containing analysis developed through dialogue with the filmmakers, New Zealand Filmmakers is an authoritative study of the film industry in New Zealand. Each essay also includes a thorough and definitive filmography, detailing the full nature of the work produced by each individual, with key titles highlighted.

Stuart Murray is Senior Lecturer in Postcolonial Literatures in the School of English at the University of Leeds.

At the present time no satisfactory, adoptable texts are available that cover a range of New Zealand films and filmmakers. New Zealand Filmmakers is a necessary contribution to film studies."

New Zealand filmmaking is in the spotlight, in the wake of the global successes of The Lord of the Rings and King Kong. This very timely book will enlighten readers about the 'other' New Zealand cinema, with fascinating insights into the creative output of this South Pacific nation."

– Geoff Lealand, associate professor of Screen and Media Studies at the University of Waikato, New Zealand