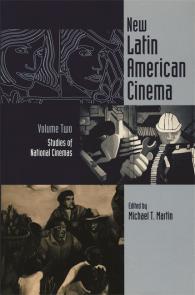 Mapping the historical and cultural contexts of film practices in Latin America, this two-volume collection of programmatic statements, esays and interviews is devoted to the study of a theorized, dynamic and unfinished cinematic movement. Forged by Latin America's post-colonial environment of underdevelopment and dependency, the New Latin American Cinema movement has sought to inscribe itself in Latin America's struggles for cultural and economic autonomy.

This volume comprises essays on the development of the New Latin American Cinema as a comparative national project. Essays are grouped by nation into two regions - Middle and Central America and Caribbean and South America - for comparitive study, particularly between capitalist and post-revolutionary socialist formations. The selected essays examine the relationship between cinema and nationhood and the ambiguous categories of culture, identity and nation within the socio-historical specificities of the movement's development, especially in Cuba, Brazil, Mexico, Chile and Argentina. This collection will serve as an essential reference and research tool for the study of world cinema. The collection, while celebrating the diversity and innovation of the New Latin American Cinema, explicates the historical importance of filmmaking as a cultural form and political practice in Latin America.

MIchael T. Martin is a professor and chair of the Department of Africana Studies at Wayne State University. He is the co-editor of Studies of Development and Change in the Modern World and the director and co-producer of the award-winning documentary, In the Absence of Peace. He received his Ph.D. from the University of Massachusetts at Amherst.