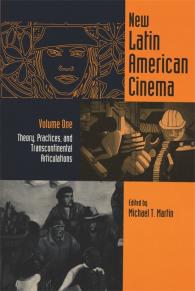 A timely, well-organized and thoughtful compilation with contributions from the leading scholars of Latin American cinema, it will quickly become the standard work in the field.

Mapping the historical and cultural contexts of film practices in Latin America, this two-volume collection of programmatic statements, essays and interviews is devoted to the study of a theorized, dynamic and unfinished cinematic movement. Forged by Latin America's post-colonial environment of underdevelopment and dependency, the New Latin American Cinema movement has sought to inscribe itself in Latin America's struggles for cultural and economic autonomy.

This volume explores the formation of the New Latin American Cinema movement, its national and continental implications (including the diasporic/exilic experience) and transcontinental articulations through the writings of pioneer film-makers and scholars. Glauber Rocha, Julio Garcia Espinosa, Jorge Sanjines, Fernando Solanas and Octavio Getino address the central question of the Latin American aesthetic - a particular style and production method connected with the political and social conditions and circumstances of Latin America. Ana Lopez, Julianne Burton and Michael Chanan examine the movement's formation in the 1950s and its development through the 1980s in a socio-historical context, paying special attention to modes of production and consumption. Paul Willemen assesses the movement's relevance to radical film practice and theory in the First and Third Worlds, and Antonio Skarmeta calls for a distribution network of Third World Cinema on a pan-European level. The volume concludes with essays by Ruby Rich and Zuzana M. Pick who address, from widely different approaches, the issues of the movement's adaptability, renovation and identity, in consideration of its evolution since the 1950s.

MIchael T. Martin is a professor and chair of the Department of Africana Studies at Wayne State University. He is the co-editor of Studies of Development and Change in the Modern World and the director and co-producer of the award-winning documentary, In the Absence of Peace. He received his Ph.D. from the University of Massachusetts at Amherst.

Michael T. Martin's New Latin American Cinema is an indispensable resource for scholars and students of international cinema, mass-mediated culture, art, and politics. The two-volume anthology brings together major theoretical statements by participants in the continent-wide movement, seminal critical and contextual analyses, discussions of international implications and articulations, and essays tracing cinematic developments in individual countries. A timely, well-organized and thoughtful compilation with contributions from the leading scholars of Latin American cinema, it will quickly become the standard work in the field.

15 hours 28 min ago
Wayne State University President M. Roy Wilson with his teacher in high school. Check out this image and many more… https://t.co/W3kp1D7dFX
1 day 15 hours ago
HAPPY PUB DATE! Dan Gerber said "If you make yourself available to Cindy Hunter Morgan’s poems, they will revivif… https://t.co/L60dTqsUUj
2 days 11 hours ago
Grab your copy or e-book of @fkwang's YOU CANNOT RESIST ME WHEN MY HAIR IS IN BRAIDS today! https://t.co/htFDjNa9yj https://t.co/zHyt049441