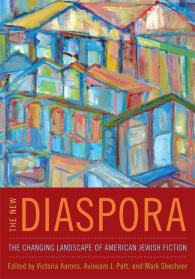 The Edward Lewis Wallant Award was founded by the family of Dr. Irving and Fran Waltman in 1963 and is supported by the University of Hartford’s Maurice Greenberg Center for Judaic Studies. It is given annually to an American writer, preferably early in his or her career, whose fiction is considered significant for American Jews. In The New Diaspora: The Changing Landscape of American Jewish Fiction, editors Victoria Aarons, Avinoam J. Patt, and Mark Shechner, who have all served as judges for the award, present vital, original, and wide-ranging fiction by writers whose work has been considered or selected for the award. The resulting collection highlights the exemplary place of the Wallant Award in Jewish literature.

With a mix of stories and novel chapters, The New Diaspora reprints selections of short fiction from such well-known writers as Rebecca Goldstein, Nathan Englander, Jonathan Safran Foer, Dara Horn, and Julie Orringer. The first half of the anthology presents pieces by winners of the Wallant award, focusing on the best work of recent winners. The New Diaspora’s second half reflects the evolving landscape of American Jewish fiction over the last fifty years, as many authors working in America are not American by birth, and their fiction has become more experimental in nature. Pieces in this section represent authors with roots all over the world—including Russia (Maxim Shrayer, Nadia Kalman, and Lara Vapnyar), Latvia (David Bezmozgis), South Africa (Tony Eprile), Canada (Robert Majzels), and Israel (Avner Mandelman, who now lives in Canada).

This collection offers an expanded canon of Jewish writing in North America and foregrounds a vision of its variety, its uniqueness, its cosmopolitanism, and its evolving perspectives on Jewish life. It celebrates the continuing vitality and fresh visions of contemporary Jewish writing, even as it highlights its debt to history and embrace of collective memory. Readers of contemporary American fiction and Jewish cultural history will find The New Diaspora enlightening and deeply engaging.

Avinoam J. Patt is Philip D. Feltman Professor of Modern Jewish History at the Maurice Greenberg Center for Judaic Studies at the University of Hartford, where he is also director of the Museum of Jewish Civilization and administers the Edward Lewis Wallant Award. He is the author of Finding Home and Homeland: Jewish Youth and Zionism in the Aftermath of the Holocaust (Wayne State University Press, 2009) and co-editor with Michael Berkowitz of "We Are Here": New Approaches to the Study of Jewish Displaced Persons in Postwar Germany (Wayne State University Press, 2010). He has been a contributor to several projects at the United States Holocaust Memorial Museum and is co-author of the recently published source volume Jewish Responses to Persecution, 1938­–1940.

Mark Shechner was professor emeritus at the University at Buffalo, SUNY. He published widely on American literature and American Jewish fiction and intellectual life and has done extensive book reviewing over the course of his career.

This substantial, engaging anthology brings together almost 40 winners of the Wallant Awards for Jewish short stories,
spanning several decades. The title, referring to a "new" Diaspora—in this case the US and Canada—concerns the
current situation in which Jews now move about the world, sometimes at will and sometimes in response to familiar
oppressions. This dispersal means that Jewish writers will adapt and blend their old cultures with the new, North
American one, and in modern ways. The authors included represent, and provide fresh interpretations of, the contemporary Jewish experience. Though these stories address the problematics of what is "Jewish" in this age of assimilation, they do not provide easy answers, thus making this good reading and good literature.

The New Diaspora is an ambitious project, bringing together thirty-six short stories about Jewish life in a massive collection featuring some of America’s best Jewish writers. There’s a variety of excellent writing here, Jewish in focus but also accessible to a wider audience, with stories that hit every emotion and should interest fans of any writing style.

The New Diaspora, edited by Victoria Aarons, Avinoam J. Patt and Mark Shechner, is only the latest and largest of a series of anthologies that make a strong claim for these recent writers, most of them more unambiguously comfortable in their Jewishness than were their predecessors.

The New Diaspora is a superb, and much needed, volume for anyone interested in understanding the complexity, richness, and diversity of the contemporary Jewish literary world with its emphasis on the complexity of the Jewish historical experience itself. The editors, Victoria Aarons, Avinoam J. Patt, and Mark Shechner, all senior scholars, are administrators and judges for the Edward Lewis Wallant Award. They have performed a real service in compiling a book that is fundamentally—as they put it—‘about the tradition of storytelling itself.’ This work is both timely and timeless.

– Alan L. Berger, Raddock Family Eminent Scholar Chair in Holocaust Studies and director of the Center for the Study of Values and Violence after Auschwitz at Florida Atlantic University

This remarkable collection of 36 stories from new and established North American Jewish writers, with many originating in Cuba, South Africa, Hungary, Egypt, France, Canada, and Russia, as well as America, reflects the panoply of interests and literary forms that characterize the variety of Jewish experience today. Realism, allegory, fable, comedy, protest writing, confession, history—they’re all here with perspectives as different as their styles. In this anthology, culture, history, and identities intersect and remake themselves. Not to be missed, not to be skipped. Read and remember every page.

– Ira Nadel, University of British Columbia and author of Joyce and the Jews and biographies of Leonard Cohen, David Mamet, and Leon Uris

This is an exciting, adventurous anthology of contemporary American Jewish fiction with an excellent introduction by the editors. It will redefine the field—radically revising and expanding the conventional parameters of the genre—and will undoubtedly find a large audience.

– David Brauner, reader in English and American literature at the University of Reading