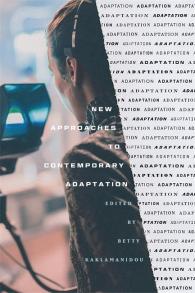 In New Approaches to Contemporary Adaptation, editor Betty Kaklamanidou defiantly claims that "all films are adaptations." The wide-ranging chapters included in this book highlight the growing and evolving relevance of the field of adaptation studies and its many branding subfields. Armed with a wealth of methodologies, theoretical concepts, and sophisticated paradigms of case-studies analyses of the past, these scholars expand the field to new and exciting realms.

With chapters on data, television, music, visuality, and transnationalism, this anthology aims to complement the literature of the field by asking answers to outstanding questions while proposing new ones: Whose stories have been adapted in the last few decades? Are films that are based on "true stories" simply adaptations of those real events? How do transnational adaptations differ from adaptations that target the same national audiences as the texts they adapt? What do long-running TV shows actually adapt when their source is a single book or novel? To attempt to answer these questions, New Approaches to Contemporary Adaptation is organized in three parts. Part 1, "External Influences on Adaptation," delves into matters surrounding film adaptations without primarily focusing on textual analysis of the final cinematic product. Part 2, "Millennial TV and Franchise Adaptations," demonstrates that the contemporary television landscape has become fruitful terrain for adaptation studies. Part 3, "ElasTEXTity and Adaptation," explores different thematic approaches to adaptation studies and how adaptation extends beyond traditional media. Spanning media and the globe, contributors complement their research with tools from sociology, psychoanalysis, gender studies, race studies, translation studies, and political science.

Kaklamanidou makes it clear that adaptation is vital to sharing important stories and mythologies, as well as passing knowledge to new generations. The aim of this anthology is to open up the field of adaptation studies by revisiting the object of analysis and proposing alternative ways of looking at it. Scholars of cultural, gender, film, literary, and adaptation studies will find this collection innovative and thought-provoking.

Betty Kaklamanidou is a Fulbright scholar and associate professor in Film and Television History and Theory at Aristotle University, Thessaloniki, Greece. She is the author of Easy A: The End of the High-School Teen Comedy? (2018), and co-editor of Contemporary European Cinema: Crisis Narratives and Narratives in Crisis (2018).

New Approaches to Contemporary Adaptation is very admirable, an apt representation of where adaptation studies can travel once scholars, readers, viewers, and artists have released adaptations and sources from binary ways of thinking. The breadth of the volume and its insistence on breaking out of traditional concepts will intrigue readers across disciplines.

– Julie Grossman, professor of literature and film studies at Le Moyne College and co-editor of the Adaptation and Visual Culture series with Palgrave Macmillan

This is a new phase adaptations book, one that adopts an open and inclusive approach to adaptation studies. Complementing recent works in the field, Kaklamanidou’s book broadly understands the process of adaptation as the audiovisualization of words and images. The result is a vibrant collection of chapters, which ranges across literature and music, film and television to demonstrate the urgency of adaptation studies in the humanities today.

True to its title, New Approaches to Contemporary Adaptation offers new insights into a well-established field. Leaning into her structuralist training, Betty Kaklamanidou, as both a writer and an editor, works to redefine ‘adaptation,’ and, in the process, to extend the scope of adaptation studies. This collection concerns itself with adaptations in broad cultural, linguistic, musical, and genre contexts, including well-researched chapters on Portuguese and Greek adaptations. The contributors to the collection do their homework, and the chapters on long-form television adaptations are particularly impressive.

– Dennis Cutchins, co-editor of The Routledge Companion to Adaptation

New Approaches to Contemporary Adaptations calls for the development of new ways of looking at adaptations and paves the way for future work in the field by highlighting the importance of data compilation and analysis. The anthology brings together ten fascinating contributions which illuminate its theoretical framework and reflect the increasingly diverse landscape of adaptations and their study.

– Costas Constandinides, author of From Film Adaptation to Post-celluloid Adaptation