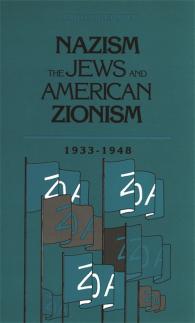 Aaron Berman takes a moderate and measured approach to one of the most emotional issues in American Jewish historiography, namely, the response of American Jews to Nazism and the extermination of European Jewry.In remarkably large numbers, American Jews joined the Zionist crusade to create a Jewish state that would finally end the problem of Jewish homelessness, which they believed was the basic cause not only of the Holocaust but of all anti-Semitism. Though American Zionists could justly claim credit for the successful establishment of Israel in 1948, this triumph was not without cost. Their insistence on including a demand for Jewish statehood in any proposal to aid European Jewry politicized the rescue issue and made it impossible to appeal for American aid on purely humanitarian grounds.

The American Zionist response to Nazism also shaped he political turmoil in the Middle East which followed Israel’s creation. Concerned primarily with providing a home for Jewish refugees and fearing British betrayal, Zionists could not understand Arab protests in defense of their own national interests. Instead they responded to the Arab revolt with armed force and sought to insure their own claim to Palestine, Zionists came to link he Arabs with the Nazi and British forces that were opposed to the establishment of a Jewish state. In the thinking of American Zionists, the Arabs were steadily transformed from a people with whom an accommodation would have to be made into a mortal enemy to be defeated.

Aaron Berman does not apologize for American Jews, but rather tries to understand the constraints within which they operated and what opportunities-if any-they had to respond to Hitler. In surveying the latest scholarship and responding o charges against American Jewry, Berman’s arguments are reasoned and reasonable.

Aaron Berman was associate professor of history at Hampshire College. He obtained his Ph.D. from Columbia University, and his articles on American Zionism have appeared in such publications as American Jewish History and Holocaust Studies Annual.