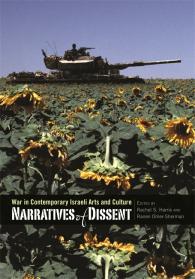 When a book like Narratives of Dissent appears, we realize that we have been waiting for it for years.

The year 1978 marked Israel's entry into Lebanon, which led to the long-term military occupation of non-sovereign territory and the long, costly war in Lebanon. In the years that followed, many Israelis found themselves alienated from the idea that their country used force only when there was no alternative, and Israeli society eventually underwent a dramatic change in attitude toward militarization and the infallibility of the IDF (Israel Defense Forces). In Narratives of Dissent: War in Contemporary Israeli Arts and Culture editors Rachel S. Harris and Ranen Omer-Sherman collect nineteen essays that examine the impact of this cultural shift on Israeli visual art, music, literature, poetry, film, theatre, public broadcasting, and commemoration practices after 1978.

Divided into three thematic sections-Private and Public Spaces of Commemoration and Mourning, Poetry and Prose, and Cinema and Stage-this collection presents an exciting diversity of experiences, cultural interests, and disciplinary perspectives. From the earliest wartime writings of S. Yizhar to the global phenomenon of films such as Beaufort, Waltz with Bashir, and Lebanon, the Israeli artist's imaginative and critical engagement with war and occupation has been informed by the catalysts of mourning, pain, and loss, often accompanied by a biting sense of irony. This book highlights many of the aesthetic narratives that have wielded the most profound impact on Israeli culture in the present day.

These works address both incremental and radical changes in individual and collective consciousness that have spread through Israeli culture in response to the persistent affliction of war. No other such volume exists in Hebrew or English. Students and teachers of Israeli studies will appreciate Narratives of Dissent.

Rachel S. Harris is assistant professor of Israeli literature and culture in the Department of Comparative and World Literature and the Program in Jewish Culture and Society at the University of Illinois, Urbana-Champaign. She has published articles on Israeli literature in The Journal of Modern Jewish Studies and Israel Studies. She is also the series editor for the Dalkey Archive Press series Hebrew Literature in Translation.

Ranen Omer-Sherman is professor of English and Jewish studies at the University of Miami. He is the author of Israel in Exile: Jewish Writing and the Desert and Diaspora and Zionism in Jewish American Literature and editor of The Jewish Graphic Novel. He lived in Israel for thirteen years as a founding member of a desert kibbutz and served in the IDF as a paratrooper.

The collection thus succeeds in combining different perspectives and beliefs about narratives of war in the Israeli context. The voices that speak are heterogeneous, the time period defines the discussion in optimal fashion, and the narratives of dissent are explained and exemplified in diverse and thought-provoking ways.

Narratives of Dissent is a rich and wide-ranging collection, which provides anglophone readers a window into contemporary Israeli society. The essays in the volume discuss and analyze numerous representations of what functions as one of Israel’s most unifying and yet dividing forces: war. . . . That the writers and editors manage to transcend politically controversial discourse and discuss the issue from a very neutral perspective is a good indication of the professional merits of their achievement.

A groundbreaking volume, unprecedented in its breadth and depth. It promises to be the most comprehensive and up-to- date multidisciplinary volume on this subject.

Narratives of Dissent is a groundbreaking volume, unprecedented in its breadth and depth. It promises to be the most comprehensive and up-to-date multidisciplinary volume on this subject for now and in the foreseeable future. The fascinating, wide-ranging discussions assembled in the volume by the two editors are a real contribution to many fields of studies: Israeli history, politics, society, literature, film, theatre, and music.

When a book like Narratives of Dissent appears, we realize that we have been waiting for it for years. This collection of essays explores not only the many obvious representations of war and conflict in Israel but also those that tend to fall under the radar of scholarly studies. In focusing on music, film, theatre, photography, monuments, internet sites, and other material artifacts of a culture of commemoration and dissent, as well as on the more canonic fiction and poetry, this volume demonstrates that nothing in Israeli society lies outside of the war culture. It also seeks to replace insularity and the dialectics of exclusion with a dialogue between the Israeli and Palestinian/Arab war narratives. While specific to the Israeli and Palestinian context, it also uncovers some of the internal contradictions within cultures fashioned as democracies and constituted and punctuated by wars and ethnic cleansing-from the Athenian Polis to the American Republic.

– Sidra DeKoven Ezrahi, Hebrew University of Jerusalem and author of Booking Passage: Exile and Homecoming in the Modern Jewish Imagination

A worthy addition to Israeli cultural studies and to the emerging ethno/musicological subfield of music and violence studies. Some of the topics covered in the volume are rarely addressed in English language scholarship, and this book makes an important contribution to Israeli Studies by offering case studies beyond canonical works, in addition to the niche focus of some of the chapters. Scholars and teachers will surely find a wealth of highly specific studies and diverse authorial voices here, which, as a whole, make substantial contributions to these fields. The originality of the two musical chapters and the interweaving of extensive ethnography with critical analysis certainly make a noteworthy contribution to contemporary ethno/musicological studies of Israel.