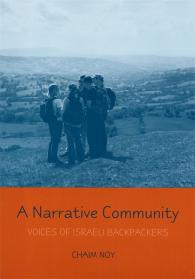 We are thankful and obliged to Noy for writing such an exceptional book related to many inter-disciplines.

Backpacking, or Tarmila’ut, has been a time-honored rite of passage for young Israelis for decades. Shortly after completing their mandatory military service, young people set off on extensive backpacking trips to "exotic" and "authentic" destinations in so-called Third World regions in India, Nepal, and Thailand in Asia, and also Colombia, Ecuador, Peru, Brazil, Chile, and Argentina in Central and South America. Chaim Noy collects the words and stories of Israeli backpackers to explore the lively interplay of quotations, constructed dialogues, and social voices in the backpackers’ stories and examine the crucial role they play in creating a vibrant, voiced community.

A Narrative Community illustrates how, against the peaks of Mt. Everest, avalanches, and Incan cities, the travelers’ storytelling becomes an inherently social drama of shared knowledge, values, hierarchy, and aesthetics. Based on forty-five in-depth narrative interviews, the research in this book examines how identities and a sense of belonging emerge on different social levels—the individual, the group, and the collective—through voices that evoke both the familiar and the Other. In addition, A Narrative Community makes a significant contribution to modern tourism literature by exploring the sociolinguistic dimension related to tourists’ accounts and particularly the transformation of self that occurs with the experience of travel. In particular, it addresses the interpersonal persuasion that travelers use in their stories to convince others to join in the ritual of backpacking by stressing the personal development that they have gained through their journeys.

This volume is groundbreaking in its dialogical conceptualization of the interview as a site of cultural manifestation, innovation, and power relations. The methods employed, which include qualitative sampling and interviewing, clearly demonstrate ways of negotiating, manifesting, and embodying speech performances. Because of its unique interdisciplinary nature, A Narrative Community will be of interest to sociolinguists, folklore scholars, performance studies scholars, tourism scholars, and those interested in social discourses in Israel.

Chaim Noy is an independent scholar currently teaching in the Department of Communication, the Hebrew University of Jerusalem.

A Narrative Community is an exquisitely nuanced and vibrant study of the narrative performances of Israeli backpackers as they recount, reflect upon, and relive their travel experiences in the context of the research interview. Elegantly structured around a multifaceted exploration of the role of quotations and the play of voices they make possible, the book weaves together meticulous and imaginative accounts of the persuasive and constitutive power of backpackers' narrations, which students of Israeli culture and society, contemporary tourism, and linguistic anthropology, among others, will find extremely compelling."

– Tamar Katriel, author of <a href="http://wsupress.wayne.edu/books/21/Dialogic-Moments">Dialogic Moments: From Soul Talks to Talk Radio in Israeli Culture</a>

A great story is the true backpacker's most prized souvenir, better by far than a photograph or trinket. In this brilliant book, Noy captures how tourists use language to find and give meaning to their adventures along the unbeaten paths of the world. Beautifully conceived and written, A Narrative Community: Voices of Israeli Backpackers gets to the heart of tourism as a personally transformative event. Refreshingly free of cynicism, Noy approaches his subjects with respect. The result is a profoundly insightful and moving account of the role of narrative in the social constitution of the self. A major contribution."

This book will be an excellent text for use by researchers, scholars, and students of tourism and related studies who have more than a passing interest in the sub-culture of the backpacking community. While this book is specifically written about Israeli backpackers, the findings can be applied to all backpacking communities and backpackers. This book is a worthwhile excavation into the life and driving force behind backpackers and their raison d'etre. I recommend this work to all those who research backpackers and their communities in any capacity.

Chaim Noy presents us with a generous gift: a sophisticated, creative, and fully grounded account of the pragmatic uses of narrative constructions. The book is without peer and is in itself a narrative of the highest order. My enthusiasm was sustained from beginning to end."

We are thankful and obliged to Noy for writing such an exceptional book related to many inter-disciplines."

A Narrative Community makes a significant contribution to modern tourism literature by exploring the sociolinguistic dimensions of tourists' accounts and the transformation of self that occurs with the experience of travel. Because of its unique interdisciplinary nature, it will be of interest not only to tourism and folklore scholars, but also to those interested in sociolinguistics and social discourse performances."

[This] book is an excellent contribution to communication studies and ethnographic methodology. I do think this study is one that can be of great use to teachers, students, and scholars interested in how discourse functions within groups that actually have minimal face-to-face interactions."