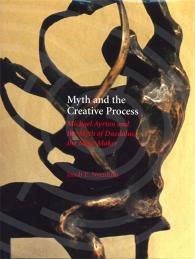 Myth and the Creative Process

Michael Ayrton and the Myth of Daedalus

Nyenhuis' Myth and the Creative Process brings many rich insights to the way in which artists have mined Greek myth for their own work. No one interested in this issue can afford to ignore this fascinating book.

In a century that was dominated by science and technology, the wide-ranging artwork of Michael Ayrton (1921-75) is truly a tribute to the enduring power of Greek myth. Theorists often discuss the link between myth and creativity, but rarely does one see this connection manifested so provocatively over the course of an artist’s career. Fittingly, this British sculptor, painter, author, filmmaker, and maze designer was inspired by the story of the archetypal craftsman Daedalus—father of Icarus and maker of the labyrinth that imprisoned the Minotaur—and produced over 800 works that in turn enhance the myth’s significance. Highlighting the interaction between myth and artist, word and image, Jacob Nyenhuis here presents a catalogue of these works, one that will enlighten Ayrton’s British following while introducing him to an American audience.
A nonconformist who challenged Picasso’s reign over the art world, Ayrton found in Daedalus a richly complex story of captivity and escape, ingenuity and creativity, flight and fall, success and failure. Ayrton’s own journey into the labyrinth set him on a torturous path through life and into the psyche: he came to identify himself not only with the craftsman but also with the Minotaur, representative of the bestial nature hidden within all of us. He ultimately created a new visual syntax that expanded the meaning of the labyrinth in disturbing ways for the twentieth century. The intensity of Ayrton’s journey is conveyed in this beautifully produced volume comprising biography, critical analysis, historical context, and an annotated catalogue of the works, many appearing in color.

Jacob Nyenhuis enters the labyrinth that captivated and liberated Michael Aryton's imagination. He brings back insights from Aryton's works that enrich the understanding of the creative process. Nyenhuis shows that even today, we experience in myths the power to discover reality."

Nyenhuis' work benefits greatly from his personal acquaintance with the artist Michael Ayrton, a relationship that makes Nyenhuis' analysis of the development of Ayrton's artistic sensibility very credible. Nyenhuis writes most eloquently about Ayrton's own intensely personal creative process. The numerous color and black and white plates show Ayrton's attempts to encounter the myth of the labyrinth from many perspectives and in many formulations, including depictions of Pasiphae, the Sibyl, Talos, the maze-maker Daedalus, and Icarus, through whom Ayrton tries 'to evoke a deeper awareness of heroic achievement or of foolhardy striving.' Nyenhuis' own scholarly creation follows a middle ground similar to that of Ayrton's, striking a balance between the classical Daedalus and the romantic Icarus."

Nyenhuis' Myth and the Creative Process brings many rich insights to the way in which artists have mined Greek myth for their own work. No one interested in this issue can afford to ignore this fascinating book."

Jacob Nuyenhuis has written an insightful account of the territory where art, literature, and myth meet and merge. This book is a maze of ideas that have an impact on the spirit and the imagination.

Nyenhuis has given us as thorough an exploration of the mind and oeuvres of Ayrton as possible. Probing in its insight and far-ranging in its grasp, Myth and the Creative Process, is an essential tool for understanding the artist, his obsession with the myth of Daedalus, and the labyrinth's significance for contemporary human life."

Nyenhuis has compiled Ayrton's sketches, sculptures, and writings on Daedalus in this splendid book, as well as literary and mythical background on the myth, and an informative biography of the artist . . . This collection will be of wide interest, to classicist and non-classicist alike, and especially to Vergilians and all those who have been fascinated by Cumae and its legacy."

[NyenhuisJ has concentrated on a single aspect of Ayrton's work, but that aspect is so central, and was so consuming for the last two decades of the artist's brief life, that it becomes, almost overnight, the cornerstone of all present and future studies of Ayrton's work. ... [Nyenhuis hasJ produced an exhaustive study of the two vital decades of Ayrton's devotion to these perennially fascinating classical myths. At a time when the facile simplemindedness of a Carl Andre or Richard Serra can be hailed as greatness, it is salutary to have so intricate, scrupulously researched, copiously illustrated, well printed and superbly bound a tribute to the artist as craftsman, as maker and inventor, both in the mythical guise of Daedalus and the thoroughly real and earthy form of Michael Ayrton.