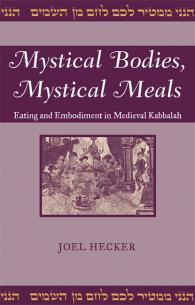 Eating and Embodiment in Medieval Kabbalah

This book is a superb and distinctive contribution to the study of ritual in Judaism in general, and Kabbalah in particular.

Mystical Bodies, Mystical Meals is the first book-length study of mystical eating practices and experiences in the kabbalah. Focusing on the Jewish mystical literature of late-thirteenth-century Spain, author Joel Hecker analyzes the ways in which the Zohar and other contemporaneous literature represent mystical attainment in their homilies about eating. What emerges is not only consideration of eating practices but, more broadly, the effects such practices and experiences have on the bodies of its practitioners.

Using anthropology, sociology, ritual studies, and gender theory, Hecker accounts for the internal topography of the body as imaginatively conceived by kabbalists. For these mystics, the physical body interacts with the material world to effect transformations within themselves and within the Divinity. The kabbalists experience the ideal body as one of fullness, one whose boundaries allow for the intake of divine light and power, and for the outward overflow of fruitfulness and generosity; at the same time, the body retains sufficient integrity to confer a sense of completeness, as the perfect symbol for the Divinity itself.

Nourishment imagery is used throughout the kabbalah as a metaphor signifying the flow of divine blessing from the upper worlds to the lower, from masculine to feminine, and from Israel to the Godhead. The body’s spiritual continuity allows for unions between the kabbalistic devotee and his food, table, chair, and wine and is exemplified in the practices and experiences surrounding the consumption of food; this continuity is also applicable to other aspects of embodiment, such as the kabbalist’s union with his fellow man. Mystical Bodies, Mystical Meals underscores the homosocial quality of the kabbalistic fraternity, in which gendered hierarchies of master and disciple are linked to the imagery and dynamics of nourishment and sexuality. Bringing this entire spectrum into focus, Hecker ultimately considers how the oral cavity and stomach, even the emotions associated with festive meals, are mobilized to produce the soul of the mystical saint in medieval kabbalah.

Joel Hecker is associate professor of Jewish mysticism at the Reconstructionist Rabbinical College.

Hecker is to be highly commended for presenting a systematic study of the variegated aspects of eating within the non-systematic material found in the Zohar and related literature, such as Sefer Rimmonim ('The Book of the Pomegranates'). This work is accessible to non-specialists who subscribe to the popularity of present-day Kabbalah, as taught and practiced in popular culture; it was a pleasure to read."

– Journal of Religion and Popular Culture

This book is a superb and distinctive contribution to the study of ritual in Judaism in general, and Kabbalah in particular. By focusing on the meaning of food and the act of eating in medieval Kabbalah, Hecker broadens and deepens our understanding of the role of ritual performance in Jewish mysticism. A work of considerable methodological sophistication, it is also an important contribution to the history of religion."

12 hours 9 min ago
RT @DarkProjections: Celebrating #Kolchak release day with an appearance on @richardsyrett’s Strange Planet. We talk all things NIGHT ST… https://t.co/96VJZhpsti
16 hours 39 min ago
RT @zoebossiere: So thrilled to announce a new anthology, THE LYRIC ESSAY AS RESISTANCE: TRUTH FROM THE MARGINS, w/ @ericatrabold av… https://t.co/LixsspYdKb
1 day 9 hours ago
Today marks the 4th anniversary of the passing of the Queen of Soul, Aretha Franklin. In THE QUEEN NEXT DOOR, phot… https://t.co/DbwToz8ff4