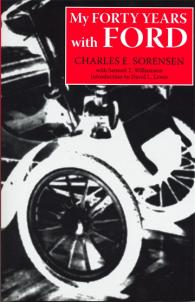 My Forty Years with Ford

My Forty Years with Ford is essential for readers who seek insight into twentieth-century America's economy of scale.

In My Forty Years with Ford, Charles Sorensen-sometimes known as "Henry Ford's man," sometimes as "Cast-iron Charlie"-tells his own story, and it is as challenging as it is historic. He emerges as a man who was not only one of the great production geniuses of the world but also a man who called the plays as he saw them. He was the only man who was able to stay with Ford for almost the full history of his empire, yet he never hesitated to go against Ford when he felt the interests of the company demanded it. When labor difficulties mounted and Edsel's fatal illness was upon him, Sorensen sided with Edsel against Henry Ford and Harry Bennett, and he insisted that Henry Ford II be brought in to direct the company despite the aging founder's determination that no one but he hold the presidential reins.

First published in 1956, My Forty Years with Ford has now been reissued in paperback for the first time. The Ford story has often been discussed in print but has rarely been articulated by someone who was there. Here Sorensen provides an eyewitness account of the birth of the Model T, the early conflicts with the Dodge brothers, the revolutionary announcement of the five-dollar day, and Sorensen's development of the moving assembly line-a concept that changed our world. Although Sorensen conceived, designed, and built the giant Willow Run plant in nineteen months and then proceeded to turn out eight thousand giant bombers, his life's major work was to make possible the vision of Henry Ford and to postpone the personal misfortune with which it ended. My Forty Years with Ford is both a personal history of a business empire and a revelation that moves with excitement and the power of tragedy.

Charles E. Sorensen (1881–1968) was born in Copenhagen, Denmark, and arrived in the United States in 1883. He attended school until the age of thirteen when he was apprenticed to a patternmaker in a Buffalo, New York stove works. At seventeen, Sorensen moved to Detroit. He met Henry Ford in 1901 and began working as a patternmaker for Ford in 1905. Sorensen retired from Ford Motor Company in 1944.

In addition to documenting some of Henry Ford’s DT&I ownership experiences from an insider’s perspective, Sorensen also provides a great deal of insight into the personality of the man who ran Ford Motor Company during the period of his employment between 1905 and 1944. Ever one to seek the limelight, Henry Ford has been credited with many great accomplishments during his lifetime. Some of them were his own doing, for example, building a low price car for the masses and paying his employees a living wage that enabled them to become middle class consumers. Other accomplishments, however like the moving assembly line were brought to fruition with the assistance of others. And of course there were failures as well, perhaps none greater than the relationship he had with his son Edsel. While they remain just one man’s recollections, Sorensen’s book makes a great read in this, the 150th anniversary year of Henry Ford’s birth.

A genuine page-turner with all the suspense of a murder mystery."

Charles Sorensen exemplified three of the characteristics Henry Ford admired most-talent, toughness, and loyalty. His memoir is the only insider's look at Ford Motor Company during its most creative period, from the advent of the Model T to the building of the Willow Run bomber plant. Anyone interested in the story of Ford will be delighted that the book is back in print."

Sorensen's autobiography is an eyewitness look at the rise of an American manufacturing colossus, the Ford Motor Company. Hired by Henry Ford in 1905, Sorensen spent parts of five decades as one of Henry's most trusted lieutenants. In these readable pages, Sorensen describes his role in perfecting mass production, engineering the Model T, establishing the $5.00-a-day wage for automobile assembly workers, and constructing the Ford Rouge-the world's largest factory complex-and he sheds light on his personal relationship with Henry Ford. Even though Sorensen presents himself favorably and scholars may challenge some of his assertions, My Forty Years with Ford is essential for readers who seek insight into twentieth-century America's economy of scale."

Simply to mention that this book, originally published in 1956, is available again is all that needs to be said. A most readable book, it is a must for every historian's library-and this first paperback edition is enhanced by a super introduction by Ford historian and SAH stalwart, David L. Lewis."