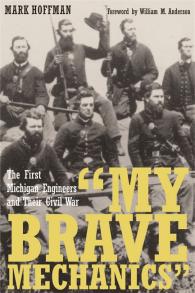 The First Michigan Engineers and Their Civil War

The book is well researched and written, a valuable addition to the literature of the war.

As volunteer engineers for the Union army, the First Michigan Engineers and Mechanics regiment was made up of skilled artisans, craftsmen, railroad men, and engineers whose behind-the-scenes work was crucial to the Union victory. Charged with maintaining the Union supply line in the western theater, the engineers constructed and repaired a staggering number of bridges, blockhouses, fortifications, railroads, and telegraph lines to keep the Union army functioning in the aftermath of battle. "My Brave Mechanics" traces the history of this little-known unit, revealing their substantial engineering accomplishments as well as their combat experience.

Although they were charged primarily with engineering work, the regiment also saw substantial direct combat action. Confederate guerillas and bushwackers bent on disrupting vital communication and supply lines routinely disregarded the usual rules of warfare to target the engineers. They struck quickly, and sometimes at night, exploiting the isolation and vulnerability of the workmen, who, unlike regular infantrymen, were almost never dug-in and ready for an attack. Yet despite the odds against them, the Michigan engineers are recognized for several key accomplishments, including their work in keeping the railroad open south from Union supply depots in Louisville, the relief of the Union forces in Chattanooga, and destruction of rebel railroads during Sherman’s march through Georgia and the Carolinas. The regiment’s senior officers also held important posts within the Union military organization in the west and were instrumental in developing a coherent policy for the use of captured rebel railroads and infrastructure.

Historian Mark Hoffman offers readers a detailed account of the Michigan engineers from a wealth of sources, including letters, diaries, regimental papers, communications and orders from the military establishment, period newspapers, and postwar accounts. As little has been written about Union volunteer engineers in the western theater, their unique history will undoubtedly be fascinating reading for Civil War buffs, local historians, and those interested in the history of American military engineering.

Mark Hoffman is deputy department director of the Michigan Department of History, Arts and Libraries.

The author does a very good job of explaining the many supporting roles performed by engineering formations within the Union army. My Brave Mechanics" has all the elements of a first-rate regimental history. The research is exemplary, the bibliography displaying a vast array of unpublished source materials, as well as a great volume and variety of published works consulted. Well presented, deeply researched, and appropriately detailed, My Brave Mechanics" is an original and important additional to the literature, a wonderful history of the military contribution of the volunteer engineers to the ultimate victory of the Union army in the western theater."

This work traces the history of this little-known unit of volunteer mechanics and reveals the group's substantial engineering accomplishments and combat experience. Hoffman offers readers a detailed account of the Michigan engineers from a wealth of sources, including letters, diaries, regimental papers, period newspapers and postwar accounts. Mark Hoffman has created an excellent volume that is well crafted, extensively researched, and accompanied with many photos. My Brave Mechanics" fills an important niche in the history of our great state and its contributions to the American Civil War.

My Brave Mechanics tells the tale of the First Michigan Engineers, a regiment of Wolverine volunteers whose skill with tools and courage in battle contributed greatly to the North's defeat of the South in the West. Well researched and well written, it provides many significant insights into how the Civil War was waged."

– Albert Castel, author of Decision in the West: The Atlanta Campaign of 1864

Hoffman makes extensive use of primary evidence in his writing, much of it privately held in the hands of the solders' descendents or in university archives, and provides extensive notes, photos, and maps to support the text."

His [Mark Hoffman's] extensive use of diaries, letters, and military records associated with the regiment enable him to tell the story of a little-known but valuable unit clearly and thoroughly, thereby illuminating a forgotten chapter in the military history of the Wolverine state."

In My Brave Mechanics, genealogist Mark Hoffman offers readers an extremely detailed and updated account of the First Michigan Engineers and Mechanics, utilizing a vast array of primary sources, including unpublished letters and dairies, regimental newspapers, period newspapers and postwar recollections. The author also does an admirable job of describing where these engineers hailed from, including analyzing their average ages, prewar occupations and trades, all of which gives a solid statistical portrait of who exactly there skilled laborers were. Hoffman has successfully added an important piece to the Civil War's regimental history canon, such that students of the war in the Western Theatre or military engineering in general will want to add My Brave Mechanics to their libraries."

My Brave Mechanics is a fine history of an unusual regiment, the First Michigan Engineers. Organized in 1861 to provide bridging and similar facilities to the armies, the Michigan men were assigned to the western theater and worked at Corinth, on Sherman's march, and finally at Bentonville. The book is well researched and written, a valuable addition to the literature of the war."