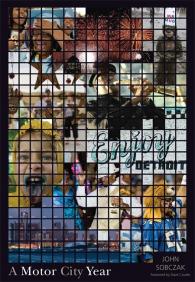 In A Motor City Year, John Sobczak expertly depicts the heart and soul of our region. He vividly captures the unique personality of a unique city — its memories, traditions, and struggles!

In A Motor City Year, award-winning photographer John Sobczak captures everyday life in Metro Detroit in 365 images. His photographs showcase the familiar—the Thanksgiving Day parade in Detroit, vendors at Eastern Market, the Woodward Dream Cruise—the less familiar—cycling at the velodrome in Rochester, robots on the line at the Warren Truck Assembly Plant—and the quirky—the birthday of one of Detroit’s oldest women, a tattoo artist at work. Taken together, the photographs in A Motor City Year demonstrate the full texture of life in Detroit, from the traditions we hold dear, to the places we work and play, the people we visit, and the challenges that we face.

This volume is divided into four sections according to the seasons, beginning with spring. In this first section, Sobczak follows people and places across the Detroit area coming back to life after a long winter, including rowers on the Detroit River, dancers at a high school prom, neighborhood basketball players in Detroit, and visitors to Domino’s Petting Farm. Summer images include all of the major festivals—like GM River Days, Comerica City Fest, the Ann Arbor Art Fair, the Detroit International Jazz Festival, and Arts, Beats, and Eats—as well as more obscure events like the Michigan Elvisfest and Hines Park’s Mud Days. Photographs in the fall and winter sections show communities and individuals living, working, and celebrating in the colder months, with traditions like the annual Michigan–Michigan State football game, the Hob Nobble Gobble, and ice skating at Campus Martius Park. Over the course of the year, Sobczak takes readers into schools, stadiums, homes, and churches across Metro Detroit, as well as distinctive Detroit-area locations like the Russell Industrial Center, Planet Rock Climbing Gym, Zingerman’s Delicatessen, Henry the Hatter, and the abandoned Michigan Central Depot.

Sobczak’s photographs are united by their intimate perspective and satisfying variety. While not all of the images are pretty, they represent the diversity and unique excitement of life in the Motor City, a place too often painted with a broad negative brush. Detroit-area residents and anyone with ties to the region will appreciate this timely collection of photography.

John Sobczak is a professional photographer based in Detroit whose images have appeared in numerous publications, including Time, Newsweek, USA Today, Hour Detroit, Detroit Monthly, and Crains Detroit Business, and whose work is part of the permanent collection of the Cleveland Museum of Art and the Detroit Institute of Arts. He has published several books of photography, including The Vision of Words, Motor City Memoirs, Cleveland Classics, Great Stories from the North Coast, and Great Stories from Boston.

A Motor City Year is a tale of Detroit told by a Detroiter, which stands as a nice contrast to the now-popular Detroit ruin photos taken by curious outsiders who chose to focus on the city's decay."

In A Motor City Year, John Sobczak expertly depicts the heart and soul of our region. He vividly captures the unique personality of a unique city-its memories, traditions, and struggles."

A Motor City Year shows Metro Detroit in all its many-hued and many-seasoned splendor. Even if you are a lifelong Detroiter, you are likely to see places you never knew existed and others that you have always longed to see."

From working to relaxing, competing to collaborating, celebrating to grieving, Detroit's people are what make our city special. The beautiful photographs in A Motor City Year memorialize some of my favorite events and capture the spirit of my hometown, Detroit.

2 days 3 min ago
Now a National Jewish Book Award Finalist! @JewishBook https://t.co/qTKAeUEPVX
2 days 3 hours ago
RT @Steph_Steinberg: Tomorrow @ 7 p.m.! Join me and @DETWritingRoom at The Whitney for our first #2023AuthorSeries event ft. @waynestate… https://t.co/pssbi2NLNs
6 days 4 hours ago
SAVE THE DATE! Join author Desiree Cooper and illustrator Bec Sloane this Saturday for a behind the scenes look at… https://t.co/cKDBmbewOa