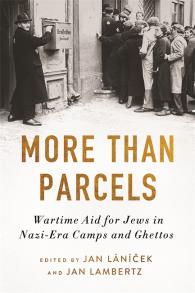 Wartime Aid for Jews in Nazi-Era Camps and Ghettos

More than Parcels: Wartime Aid for Jews in Nazi-Era Camps and Ghettos edited by Jan Lánícek and Jan Lambertz explores the horrors of the Holocaust by focusing on the systematic starvation of Jewish civilians confined to Nazi ghettos and camps. The modest relief parcel, often weighing no more than a few pounds and containing food, medicine, and clothing, could extend the lives and health of prisoners. For Jews in occupied Europe, receiving packages simultaneously provided critical emotional sustenance in the face of despair and grief.

Placing these parcels front and center in a history of World War II challenges several myths about Nazi rule and Allied responses. First, the traffic in relief parcels and remittances shows that the walls of Nazi detention sites and the wartime borders separating Axis Europe from the outside world were not hermetically sealed, even for Jewish prisoners. Aid shipments were often damaged or stolen, but they continued to be sent throughout the war. Second, the flow of relief parcels—and prisoner requests for them—contributed to information about the lethal nature of Nazi detention sites. Aid requests and parcel receipts became one means of transmitting news about the location, living conditions, and fate of Jewish prisoners to families, humanitarians, and Jewish advocacy groups scattered across the globe. Third, the contributors to More than Parcels reveal that tens of thousands of individuals, along with religious communities and philanthropies, mobilized parcel relief for Jews trapped in Europe. Recent histories of wartime rescue have focused on a handful of courageous activists who hid or led Jews to safety under perilous conditions. The parallel story of relief shipments is no less important.

The astonishing accounts offered in More than Parcels add texture and depth to the story of organized Jewish responses to wartime persecution that will be of interest to students and scholars of Holocaust studies and modern Jewish history, as well as members of professional associations with a focus on humanitarianism and human rights.

Jan Lambertz is a historian and Applied Researcher at the Mandel Center for Advanced Holocaust Studies of the U.S. Holocaust Memorial Museum.

Jan Lánícek is Senior Lecturer in Modern European and Jewish history at the University of New South Wales in Sydney.

A fascinating book. Demonstrating considerable skill in navigating the archives, the contributors reveal the remarkable extent of aid to ghetto and concentration camp inmates. How these programs operated, why the Nazis permitted them, and what difference they made to the recipients are all investigated. This is a much-needed book, tackling issues that are often observed but rarely addressed by historians.

This is an excellent, innovative, and important collection that provides striking evidence of Jewish and non-Jewish humanitarian agency and communication across the Nazi empire—though even the most courageous and determined interventions could hope to alleviate the thrust of Nazi policies only on the margins.

– Mark Roseman, author of Lives Reclaimed: A Story of Rescue and Resistance in Nazi Germany

This collection, a first of its kind, explores the help that was possible as the Nazis ghettoized, incarcerated, and starved Jews. In painful detail, the essays also describe the myriad obstacles that prevented sufficient aid and the organizations, families, and individuals who mailed packages of food, sending love and solidarity.

More Than Parcels brings together highly accomplished scholars to illuminate the neglected subject of humanitarian relief during the Holocaust. Through concise and valuable case studies, Lánícekand Lambertz supply convincing evidence that sending relief into ghettos and camps was a form of rescue, involving many individuals, private organizations, and, occasionally, government agencies.

– Richard Breitman, Distinguished Professor Emeritus, American University, and author of The Berlin Mission: The American Who Resisted Nazi Germany from Within

This is a remarkable collection of brilliantly researched and subtle chapters on the various forms of relief for the persecuted Jews during the Holocaust. Superbly organized and edited, this is the first sustained treatment of the subject providing a wide range of case studies which help to reinterpret well-known bodies such as the Red Cross and bring into focus little-known but important smaller organizations. Whilst it is impossible to know how many Jewish lives were saved by food parcels, this book shows the huge effort that was put into such work by Jewish and non-Jewish organizations and individuals and that, on an emotional level, they made a huge difference to the victims.

– Tony Kushner, professor at The Parkes Institute, University of Southampton

2 days 59 min ago
Now a National Jewish Book Award Finalist! @JewishBook https://t.co/qTKAeUEPVX
2 days 4 hours ago
RT @Steph_Steinberg: Tomorrow @ 7 p.m.! Join me and @DETWritingRoom at The Whitney for our first #2023AuthorSeries event ft. @waynestate… https://t.co/pssbi2NLNs
6 days 5 hours ago
SAVE THE DATE! Join author Desiree Cooper and illustrator Bec Sloane this Saturday for a behind the scenes look at… https://t.co/cKDBmbewOa