Home » Books » More Than a Method 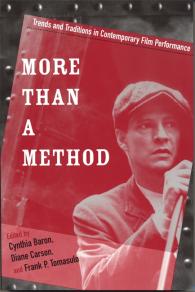 More Than a Method

More Than a Method provides an important corrective to the dominance of Stanislavskian and Method-based analysis of film acting.

Though it is often neglected in cinema scholarship, screen performance is a crucial element in the ideological and emotional impact of films. More Than a Method: Trends and Traditions in Contemporary Film Performance features twelve essays that analyze performance in post-1950s film, addressing distinct questions about the working relationships between actors and directors and discussing the interplay between performance and other cinematic techniques. The authors explain the context for performance analysis as they address an international array of film genres, actors, and directors including Alfred Hitchcock and Gus Van Sant, Robert Bresson, Michelangelo Antonioni, Robert Altman, John Cassavetes, John Sayles, Neil Jordan, Tomàs Gutiérrez Alea, Stanley Kubrick, Jim Carrey, and John Woo.

More Than a Method provides the reader with a historical perspective on film performance theory and explains the importance and relevance of analyzing acting. The essays are divided into three sections: modernism, neo-naturalism, and postmodern film performance. The authors clearly define terms relating to acting and acting styles and provide brief overviews of the significant themes and predominant visual styles of each director. The volume’s essays share a cohesive focus on the art and craft of acting, each emphasizing performance as it is presented on-screen, challenging the idea that the best (or only) way to categorize performance is by training or working method. Through dynamic and sophisticated analyses of a wide range of acting styles and choices, More Than a Method fills an important gap in today’s film scholarship.

Cynthia Baron is the author of Denzel Washington. She is also co-author of Reframing Screen Performance and co-author of Appetites and Anxieties: Food, Film, and the Politics of Representation (Wayne State University Press, 2013).

Frank P. Tomasulo teaches cinema history and theory courses at The City College of New York, CUNY, and Pace University, as well as on-line graduate seminars for National University. He has published extensively on the films of Michelangelo Antonioni and Steven Spielberg, among many other media-related subjects.

More Than a Method provides an important corrective to the dominance of Stanislavskian and Method-based analysis of film acting. In this indispensable volume, top scholars move beyond star studies to consider modernist, postmodern, neonaturalist, and ensemble film acting and to grapple with the oddly neglected question of what actors do onscreen."